Motley Crue and Alice Cooper Tickets Released For 2015 Final Tour With Seats Available at MotleyCrueandAliceCooper.com, Even if Venues Sell Out

Motley Crue and Alice Cooper tickets have become available for the public to buy for venues hosting final tour shows in 2015. Expect strong ticket sales, particularly in Hershey, San Antonio, Denver, Miami and Salt Lake City, with seats still available at MotleyCrueAndAliceCooper.com from Financial Firebird Corporation after they are sold out at the box office. 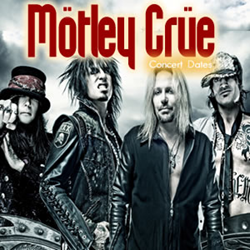 Motley Crue and Alice Cooper tickets for their final concert tour go on sale at MotleyCrueAndAliceCooper.com, including the last show ever in Los Angeles on New Year's Eve at the Staples Center.

Motley Crue and Alice Cooper join forces for the final Motley Crue concert tour. As a part of the contractual arrangements made in setting up the shows, Motley Crue will remain legally bound not to perform together as Motley Crue after 2015. Therefore, this Motley Crue Final Tour should truly represent their last shows. The group recently announced in 2015 they will visit 34 North American cities in celebration of Motley Crue’s 34 years together with the tour culminating on December 31, 2015, at The Staples Center in Los Angeles.

Tickets for cities like Eugene, Hershey, San Antonio, Denver, Miami, Salt Lake, Auburn Hills near Detroit, Philadelphia, Uncasville near Hartford CT, Baltimore MD and Tacoma go on sale today. Tickets for some shows like Houston, TX, and Worcester, MA, including the final show of the tour held at The Staples Center in Los Angeles, go on sale on tomorrow, Saturday January 24. Motley Crue and Alice Cooper fans need not wait; they can purchase tickets at MotleyCrueandAliceCooper.com now.

Motley Crue formed in 1981 with Tommy Lee on drums, Nikki Sixx on bass guitar, Mick Mars on lead guitar, and Vince Neil on vocals. From the outset, contemporaries in the California rock scene considered these four disparate characters, a motley looking crew; band members then quickly adopted the name of Motley Crue. The group shot to stardom with a series of supercharged rock albums including Shout at the Devil, Theatre of Pain, Girls, Girls, Girls and Dr. Feelgood in 1989. In an era of decadence, the glam metal band earned a reputation for excess. Dr. Feelgood referred to one of the band’s drug dealers, while Kickstart My Heart arose after Sixx had an overdose and was brought back to life by two shots of adrenaline to his heart.

Joining Motley Crue on their farewell tour, Alice Cooper promises his own special brand of excess. Born Vincent Furnier, he rose to fame in the 1970s as frontman for a band called Alice Cooper – releasing hit albums like School’s Out and Billion Dollar Babies. Adopting the band’s name as his own, Furnier went solo in 1975 as Alice Cooper, with the concept album Welcome to My Nightmare. With hits like Only Women Bleed, You and Me, and Poison, he has remained in the spotlight for more than four decades. The Godfather of Shock Rock still thrills audiences with his unique mix of heavy metal, power ballads, and horror film theatrics.

Fans in the Los Angeles area will find TicketsCheapest.com can provide tickets for all of the other major concert events at The Staples Center including Taylor Swift playing 5 shows in 2015. The iconic group The Who performs in September. Sports fans may also find LA Clippers and Los Angeles Lakers games tickets too.

Concert goers in the Denver area can also see Taylor Swift for 2 shows in September with additional acts in 2015 like Garth Brooks performing 9 extraordinary shows in March. Other concerts include Fleetwood Mac on Tour, Enrique Iglesias and Pitbull and Stevie Wonder.

In addition to a huge inventory of tickets, even after they are sold out at the box office, fans can find the complete tour schedule for the Motley Crue final tour with special guest Alice Cooper at the site. Buy tickets at MotleyCrueAndAliceCooper.com before the band dissolves forever. Call 855 805 5266 for personal telephone service.

Financial Firebird Corporation, established in 2000, stands as a proud BBB member. These sites for consumers to buy tickets online operate in the resale market and maintain no relationship with the venues or performers. The resale ticket market allows consumers access to popular events once the box office has sold out or to buy premium seats when the venue no longer offers any inventory. Within the group of these secondary market ticket services, the Financial Firebird owned ticket sites offer lower prices than competitors. Find the sites at MotleyCrueAndAliceCooper.com and TicketsCheapest.com.