Tickets for Frozen On Ice Tucson, Anaheim, and Long Beach Go On Sale With Seats Available Even When Venues Are Sold Out 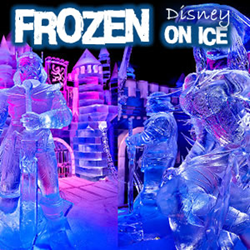 Disney on Ice-Frozen features all of the favorite characters you expect including Anna, Elsa, Kristoff and Olaf plus appearances from other Disney favorites

Disney On Ice- Frozen features all of the favorite characters you expect including Anna, Elsa, Kristoff and Olaf plus appearances from other Disney favorites. Joining Disney On Ice shows including Princesses And Heroes, Treasure Trove, Let's Celebrate, Passport To Adventure and Worlds Of Fantasy, Frozen On Ice looks to become one of Disney's best ice shows ever.
Below find a list of dates and venues where Frozen tickets remain on sale for the public to buy today.

Many of the aforementioned venues host other interesting performances like Enrique Iglesias and Pitbull, Taylor Swift (performing 5 shows) and The Who at The Staples Center in Los Angeles .
The Who also visit The Honda Center in Anaheim as well as Bette Midler, and Foo Fighters performing 2 shows. Hockey fans can see the Anaheim Ducks home games there too.
The Pepsi Center in Denver features Garth Brooks for 9 incredible shows.

About Financial Firebird and Tickets For Frozen And Ticket Broadway:
The site to buy Cheap Broadway tickets online and its sister sites, including the site to buy cheap concert tickets, all geared for the consumers looking for low prices, are affiliated with the Financial Firebird Corporation Travel Group. Financial Firebird Corporation, established in 2000 and a proud BBB member, provides unbiased consumer information. These sites for consumers to buy tickets online operate in the resale market and maintain no relationship with the venues or performers. The resale ticket market allows consumers access to popular events once the box office has sold out or to buy premium seats when the venue no longer offers any inventory. Within the group of these secondary market ticket services the Financial Firebird owned ticket sites offer lower prices than competitors. Find the sites at TicketsForFrozen.com and Ticket-Broadway.com.

Major Concert Tickets Including Sold Out Floor SeatsBuy Tickets For Shows Like Taylor Swift, Garth Brooks, Foo Fighters, The Who and More.