University of Maryland researchers are covering soap bubbles with biomaterials that act as a disguise, tricking the body’s cells into mistaking the capsule for a bacterium, a cancer cell or almost any other disease-causing cell. Because the technology is flexible, cost-effective and highly efficient, the researchers recently received $1 million from MedImmune, the global biologics research and development arm of AstraZeneca, to further test and evaluate their technology for vaccine delivery. 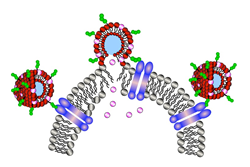 Functionalized catanionic vesicles (red) bind to and fuse with a bacterial cell surface.

If someone provides us with an antigen, it is possible for us to formulate it into a vaccine, purify it and have 1,000 doses ready within 72 hours. ~Philip DeShong, University of Maryland

When University of Maryland Professors Philip DeShong and Daniel Stein began tagging soap bubbles with biomolecules, they had no idea this technology would one day be poised to change the way drugs and vaccines fight against bacteria, viruses and cancer.

More than a decade later, the researchers are covering soap bubbles with biomaterials that act as a disguise, tricking the body’s cells into mistaking the capsule for a bacterium, a cancer cell or almost any other disease-causing cell. Because the technology is flexible, cost-effective and highly efficient, it is drawing a lot of attention from both public and private funders for drug delivery and vaccine production.

“We have created a technology platform that allows us to make drug and vaccine delivery vehicles that have previously been very difficult to prepare,” said DeShong. “If someone provides us with an antigen, it is possible for us to formulate it into a vaccine, purify it and have 1,000 doses ready within 72 hours.”

DeShong, a professor of chemistry and biochemistry, and Stein, a professor of cell biology and molecular genetics, founded the start-up company SD Nanosciences in 2007 to commercialize their drug and vaccine delivery technology, which is the basis for four pending patents. The College Park, Md.-based company has exclusively licensed the technology from UMD.

“Phil was attaching things to gold nanoparticles, and I asked him if he could conjugate proteins and carbohydrates to nanoparticles,” said Stein, who is also chief scientific officer of SD Nanosciences. “When he said the process would be straightforward chemically, I knew we had something that could be very interesting biologically.”

In May 2014, the researchers received $1 million from MedImmune, the global biologics research and development arm of AstraZeneca, to further test and evaluate their technology for vaccine delivery. Two postdoctoral fellows and two technicians are working on the project in addition to DeShong and Stein.

“MedImmune is supporting development of the technology through preclinical studies that will test the vesicle’s efficacy, stability and safety as a vaccine platform,” said DeShong, who is also president of SD Nanosciences. “This research will help us answer questions such as: How general is the technology for creating vaccines? How well does it work to create a desired vaccine? Can you use it to create different types of vaccines?”

The soap bubbles—formally known as functionalized catanionic surfactant vesicles—are made of a combination of soap-like components that have an affinity for each other and spontaneously form capsules when mixed together. Compared with liposomes, another type of drug and vaccine delivery capsule that has seen success in the market, catanionic surfactant vesicles form more quickly, have an extremely long shelf life and are made of less expensive raw materials.

In the case of vaccines, the immune system recognizes the camouflaged vesicle as a foreign object based on antigens attached to its exterior. The immune system then breaks up the vesicle and mounts an immune response against the antigen presented on the surface, hopefully destroying any cells that display the same antigens that it subsequently encounters.

For drug delivery applications, the disguised vesicle is filled with medication—a cancer drug, for example—and decorated on the outside with a targeting agent that is recognized selectively by cancer cells. As a result, the vesicle attaches preferentially to cancer cells and releases the drug. Because the functionalized vesicles bind preferentially to cancer cells rather than normal cells, the researchers anticipate this delivery method will result in lower effective doses for the drug and reduced side effects.

Previously, DeShong and Stein teamed with Stefanie Vogel, professor in the Department of Microbiology and Immunology at the University of Maryland School of Medicine, to develop a vaccine against the immune-evasive pathogen called Francisella tularensis, which causes the potentially lethal disease tularemia. Inoculation of mice with the vaccine produced high antibody titers of protective antibodies, according to findings published in the February 2014 issue of the journal Clinical and Vaccine Immunology.

Similar results were obtained when the researchers developed a vaccine against Neisseria gonorrhoeae, which is the Gram-negative bacterium responsible for the sexually transmitted infection gonorrhea.

In October 2014, the scientist duo received a Maryland Innovation Initiative (MII) award of $150,000 from the Maryland Technology Development Corporation, an agency that funds start-ups and general entrepreneurial innovation, to continue their work developing vaccines against Gram-negative bacteria.

DeShong and Stein are also working with researchers at the University of Maryland School of Medicine to test the efficacy of functionalized catanionic surfactant vesicles to deliver a cancer drug.

Sangeetha Raghavan, life science licensing associate in UMD’s Office of Technology Commercialization (OTC), said that the simplicity, robustness and low-cost nature of the technology made it licensable and very appealing to the biotech industry.

“It sounds so simple—you can apply this technology to any pathogen out there that has an antigen and produce a vaccine in 72 hours,” she said.

The researchers have received additional funding for this work from the National Institutes of Health, National Science Foundation, DuPont and the Maryland Industrial Partnerships program.