Broadway ticket packages save travelers money while providing Broadway show tickets for the Book Of Mormon, Wicked, Lion King, Kinky Boots or other musicals; a luxury 4 star hotel; and savings on meals. Financial Firebird Corporation created these packages for consumers and welcomes participation by travel agents as well. 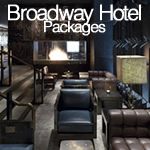 Broadway ticket packages save travelers money while providing Broadway show tickets for the Book Of Mormon, Kinky Boots, Wicked, Lion King or other musicals; a luxury 4 star hotel; and even more savings on meals and future tickets.

Broadway weekend packages include 4 star room accommodations at a hotel close to Times Square, tickets to Book Of Mormon, Wicked, Lion King, Kinky Boots or another top Broadway show, $50 off of dinner and $50 off another set of tickets. Prices for complete packages usually start at only $399 per person or less. Packages may be booked by phone from Financial Firebird in conjunction with their Ticket-Broadway.com online site. Exact prices vary based on the particular show and days selected. By choosing a less popular show, Broadway package prices may drop. Save even more when staying only one night in a Broadway hotel. Some trips may come with even cheaper package prices, for example, the specific weekend of February 28 – March 1 can be booked for only $324 per person for 2 nights in a 4 star Broadway hotel and Book Of Mormon orchestra tickets.

Broadway show tickets for these packages may be selected from any of the top Broadway musicals or plays in New York City. The package as quoted includes Orchestra tickets to the Book Of Mormon, Wicked New York, Kinky Boots or The Lion King. Other shows as options include Jersey Boys, Matilda or Phantom Of The Opera, which would all be downgrades, cutting the package price. Switching to Mezzanine or Balcony seats would lower the Broadway deal price too. Chances are a that Broadway package can be created for any other show as well. While consumers may choose the show they wish to attend, certain performances may not qualify for the lowest advertised package price. The Book Of Mormon NY tickets in the package are available for most shows during the upcoming months. Sports fans can even substitute them for Rangers, Giants, Jets, Mets, Yankees or New York Knicks tickets.

For the second leg of the package, indulge at a luxury hotel within walking distance of the Broadway theaters. The way this package operates in terms of hotels, customers can select a hotel quality level, such as 4 stars. The exact hotel will be selected by the package system, but will be at the desired star level or higher and in the specific area bordered by 5th Avenue and 9th Avenue between 42nd Street and 55th Street. Ticket-Broadway.com weekend packages for specific hotels may be booked as well, but not as a part of the aforementioned special discount offer of only $399 or less per person including hotel, tickets and dinner. To guarantee a hotel at 4.5 or 5 stars, an upgrade charge will apply. Some customers may even receive a free upgrade.

The Brazil Grill stands out as our preferred restaurant for the package because of their unique menu, fun service methods and live music. Customers may pick other restaurants near Broadway theaters to make up the package from a list of over a dozen options. All restaurants lie within the same Broadway / Times Square area as defined by the hotel portion of the package. Food choices represent a variety of price points and types of food.

On top of the rest of these savings, customers that buy the Broadway hotel package receive a special code for $50 off of their next purchase of Broadway tickets. The discount may also be used for pro sports or concert tours, either for New York City trips or near home. Using the bonus certificate for a second Broadway show the same weekend works too. Call 800 351 3301 to book.

About Financial Firebird and Broadway Hotel And Ticket Packages

The site to buy Broadway Tickets and hotel packages online is affiliated with the Financial Firebird Corporation Travel Group. Financial Firebird Corporation was established in 2000 and stands as a proud BBB member. These sites for consumers to buy tickets online operate in the resale market and maintain no relationship with the venues or performers. The resale ticket market allows consumers access to events once the box office has sold out or to buy premium seats. Within the group of these secondary market ticket services, the Financial Firebird owned ticket sites offer lower prices than competitors. Find the site at BroadwayHotelPackages.com