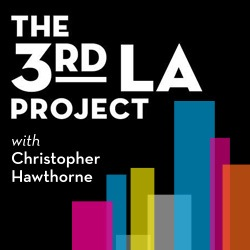 'We’re in a new phase in our civic development, and this is the time to come together and discuss and debate the future of our city,' said Jonathan Veitch, President of Occidental College.

Angelenos are invited to participate in a series of conversations about the future of the city and region. Called The Third Los Angeles Project, the series offers an unprecedented opportunity to explore the cultural, political and policy changes that are upending the stereotype of a privatized, suburban, car-dominated Los Angeles.

The series, hosted by Occidental College with KPCC, Southern California Public Radio, and directed by Christopher Hawthorne, architecture critic for the Los Angeles Times and Professor of Practice at Occidental, begins February 12, 2015, at 7:30 p.m. in the Choi Auditorium at Occidental. The series is an extension of Occidental’s commitment to building community partnerships and taking advantage of its location in one of the world’s great cities.

Los Angeles is undergoing major shifts and facing new civic challenges – its cultural center is migrating from west to east, major investments in public transit are challenging the dominance of the car and multi-family residential architecture is gaining in popularity even as climate change threatens to make the region drier and hotter.

“We’re in a new phase in our civic development, and this is the time to come together and discuss and debate the future of our city,” said Jonathan Veitch, President of Occidental College. “We need to create bridges – east-west, cross-cultural, cross-class. There are very few existing platforms for discussing Los Angeles, the collective idea of the city. That’s what we want to create.”

“SCPR is a public forum that engages its audiences in an ongoing exploration of issues, events and cultures in the region and in the world, seeking to provide greater understanding and new perspectives,” said Edgar Aguirre, Managing Director of External Relations and Strategic Initiatives. “We are delighted at the opportunity to partner with an institution like Occidental College in support of the Third Los Angeles Project Series to further that mission.”

The conversations are open to the public and are free to attend. Some will be held on the Occidental College campus in Eagle Rock, while a few are planned for other locations around the city including the MAK Center/Schindler House in West Hollywood, the Line Hotel in Koreatown and Clockshop Los Angeles near the Los Angeles River. The schedule is as follows:

1. Welcome to the Third Los Angeles – An introduction to the series and discussion of L.A.’s renewed attention to its public realm, and how the change relates to the architectural, urban and political history of Los Angeles. With UCLA’s Dana Cuff, REDCAT Gallery Director Ruth Estevez, Occidental’s Mark Vallianatos, historian William Deverell, writer Alissa Walker and others; moderated by Christopher Hawthorne. February 12, 2015 at Choi Auditorium, Occidental College

2. Post-Immigrant Los Angeles – How foreign-born residents, and their expectations about how cities work, shape the architecture and urbanism of Los Angeles. With Occidental’s Jan Lin and Kelema Moses and others. February 18, 2015 at the Line Hotel in Koreatown

3. City of Quartz at 25 – A critical view of the impact of Mike Davis’s City of Quartz: Excavating the Future in Los Angeles (published in 1990) and what it means for architects and writers a generation later. With Los Angeles Times book critic David Ulin, deputy mayor of Los Angeles Rick Cole and others. March 4, 2015 location TBD

5. The Future of the Single-Family House: New Housing Models for Los Angeles – Can the city grow denser without losing the low-rise appeal of its existing residential fabric? With architect Barbara Bestor, MAK Center’s Kimberli Meyer and others. April 8, 2015 at the MAK Center at the Schindler House, West Hollywood

6. What Do We Want the L.A. River to Be? A walking tour along the Bowtie Project in the Glendale Narrows section of the Los Angeles River followed by a discussion of the river’s emerging role as public and park space for Los Angeles. With Clockshop’s Julia Meltzer, architect Michael Maltzan, Public Works Commissioner Barbara Romero and others. April 22, 2015 at Clockshop Los Angeles

The Third Los Angeles Project is a unique collaboration among Occidental College, Southern California Public Radio and Christopher Hawthorne, Professor of Practice in the Urban & Environmental Policy Department at Occidental and, since 2004, architecture critic at the Los Angeles Times. Occidental is offering a corresponding academic course for its undergraduates. The students will take an active role in the series – meeting with the panelists and helping organize and promote the discussions.

“Los Angeles is turning into a markedly different kind of place: more public, less in thrall to the automobile, and more willing to test out various kinds of shared or collective urban space – from pocket parks and bike lanes to light-rail cars and vertical living,” said Hawthorne. “But these are not entirely new ideas here.”

In fact, the project is called The Third Los Angeles to mark the city’s third distinct era and a new appreciation for the ambitious civic architecture and mass-transit networks of pre-war Los Angeles.

The First Los Angeles, as Hawthorne defines it, stretches roughly from the city’s first population boom in the 1880s through 1940. The city, growing at an exponential pace, worked to establish a coherent civic identity – with a dense and walkable downtown, a comprehensive streetcar system, and inventive civic and multifamily residential architecture.

In the Second Los Angeles, covering the period from 1940 to the turn of the millennium, the city pursued a hugely ambitious experiment in building suburbia – a privatized, car-dominated landscape with single-family homes, private gardens and freeways.

“The Third Los Angeles is now underway, and with it, we’re not just entering a new phase – we are rediscovering the virtues and challenges of an earlier one, and acknowledging the full sweep of Los Angeles’s history,” said Hawthorne.

“Issues of urban planning and civic influence are deep-rooted in Occidental’s history, and we have the distinction of being one of the few liberal arts colleges that is based in an urban center,” said Veitch. “These are important conversations and we’re thrilled to be a catalyst.”

For reservations and more details about the specific events, visit http://www.oxy.edu/3rdLA or http://www.kpcc.org/forum and join the conversation on Twitter at #3rdLA or @ThirdLosAngeles. Reservations open February 1 and are recommended, as seating is limited.

About The Third Los Angeles Project

The Third Los Angeles Project is a series of public conversations and an academic course at Occidental College, exploring a city that is moving into a dramatically new phase in its development. The series focuses on many of the issues examined in Occidental’s Urban and Environmental Policy Institute – urbanism, planning, architecture, environment, culture, immigration, public policy – with the lens focused specifically on Los Angeles and its future growth. The topics are approached from an interdisciplinary perspective, featuring historians, cultural critics, policymakers, architects and activists. The project builds on the legacy of pioneering architectural historian Robert Winter, Occidental’s Arthur G. Coons, Professor of the History of Ideas, Emeritus.

The series is a unique collaboration among Occidental College, Southern California Public Radio and Christopher Hawthorne, professor of practice in the Urban & Environmental Policy Department at Occidental and the architecture critic at the Los Angeles Times.

The themes explored by the Third Los Angeles Project Series will also be reflected in SCPR’s newsroom coverage throughout the length of the series and beyond as part of this unique collaboration. SCPR is the most listened-to public radio news service of any kind in Southern California, reaching more than 700,000 listeners every week. SCPR operates 89.3 KPCC-FM in Los Angeles and Orange County, 89.1 KUOR-FM in the Inland Empire, 90.3 KVLA in the Coachella Valley, 89.9 FM in Santa Barbara, and 89.5 KJAI Ojai in Ventura County. SCPR's flagship station, KPCC, has garnered more than 300 journalistic honors since 1999, more than all of the other radio stations in Los Angeles combined.