The United Nations designates Feb. 6 as Zero Tolerance Day for Female Genital Mutilation, calling upon the world to use this day to enhance awareness and take concrete actions against FGM. Family support and community education through Unbound offer hope for ending FGM. 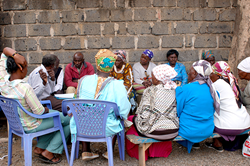 Through the empowering nature of mothers groups, parents are able to share in the well-being of their households.

It’s important for both men and women to understand the risks of FGM and protect girls from this dangerous practice.

It’s a troubling rite of passage, mostly practiced in parts of Africa and the Middle East.

FGM, also known as female circumcision, requires cutting or removing female genitalia for non-medical reasons. The United Nations estimates it has happened to more than 140 million women and girls.

“It is difficult for me to talk about this because I detest it,” said Daniel, a father of four girls who lives in Kenya and participates in Unbound, an international humanitarian organization.

FGM can result in incontinence, chronic pain, infertility or even death. The emotional trauma and social impact is just as significant.

“The girls also become mentally and emotionally traumatized after this rite of initiation,” Daniel said. “It is very painful and cruel.”

The United Nations designates Feb. 6 as Zero Tolerance Day for FGM, calling upon the world to use this day to enhance awareness and take concrete actions against FGM.

“There are many global problems that are beyond anyone’s control, but FGM is not one of them,” said Dan Pearson, director of international programs for Unbound. “FGM is a choice, so it is clearly a problem that can be solved.”

A 2012 Unbound program evaluation report of Kenya's Meru region showed the top two cultural barriers to education for girls to be FGM and early marriage.

“These two factors are to a great extent interrelated in that most girls are married off immediately after undergoing FGM,” according to a study authored by David Wamae of Unbound in Kenya.

According to the Unbound study, FGM and early marriage are accepted because girl children are seen as means for creating wealth. A girl as young as 15 could lose her sexual and reproductive health and personal dreams of over a “bride price” that can be as little as one cow.

Even if girls are not married immediately they tend to believe they are no longer children after FGM, and that school is no longer the place for them.

But Unbound families and field staffers say attitudes are changing.

Evaluations show Unbound sponsorship keeps girls in school longer. Education is a requirement of the program. While a girl is in school, financial support comes into the home to help the entire family in the form of food, housing or whatever needs they might have, which makes a small, one-time dowry less appealing or necessary.

Unbound sponsorship also brings communities together in the form of mothers groups where women are empowered to lead.

“We are sensitizing against FGM,” said Kelly Makena, a staff member of Unbound in Kenya. “We had several meetings with the children and their parents, talking about their benefits [through Unbound] and FGM. Even the children thought it was a bad action; they emphasized that Unbound is against this.”

Men, who often make these critical decisions, are part of the discussion.

“It’s important for both men and women to understand the risks of FGM and protect girls from this dangerous practice,” Pearson said. “FGM has no benefits and only brings pain, trauma and a host of health risks to girls and women.”

Daniel said he “would never let my daughters go through such a humiliating thing.” His wife, Sophia, agreed.

"I do not like the circumcision culture," she said. "I would not let my daughters go through such cruelty."
Daniel has developed the courage to speak out.

“I would like to tell them to stop hurting the girl child,” he emphasized. “She is precious and she should be respected.”

Community support plus education are creating momentum for cultural change, according to Melissa Velazquez, international evaluation and systems manager for Unbound.

“I am hopeful because with each generation things are changing,” Velazquez said.

Unbound continues to evaluate efforts against FGM and other practices that harm girls and deny them education. Unbound staffers say that people coming together as a community appear to have more influence than laws passed in the capital.

You can help girls overcome barriers to a successful future by sponsoring through Unbound.

Unbound is the largest nonprofit in Kansas with more than $120 million in annual revenue. Unbound works side by side with people of diverse faith traditions in 21 countries, bringing people together to challenge poverty in new and innovative ways.

Unbound distributes direct aid as quickly and efficiently as possible to people who need it. More than 93 percent of Unbound's expenses go toward program support.
#

Daniel and his wife, Sophia