“40 Years A Family” for the ITC, Empowering Israel’s Children…Beyond Tennis & Beyond Borders 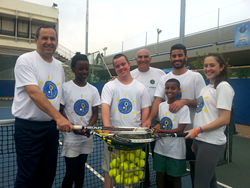 The Israel Tennis Centers Foundation announced plans for a series of tennis exhibitions as the ITC embarks on its 40th year as one of the largest social service organizations for children in Israel. “40 Years A Family” signifies a major milestone for the ITC, having empowered almost a half million Israeli children…beyond tennis and beyond borders.

“In 1975, as plans were being made for the ITC, we envisioned an organization whose mission would be to help underprivileged children learn valuable life skills through the medium of tennis,” said ITC Founder Bill Lippy. “Our goal was to provide them with the tools to become strong and productive members of Israeli society. A year later that dream came true when we opened our first center in Ramat Hasharon. I only wish all the founding fathers could see how this one center has turned into 14 throughout Israel and the hundreds of thousands of young people whose lives we’ve helped turn around.”

In recognition of the immensely important work of the ITC over the past 40 years, the ITC Foundation has planned an ambitious series of events here in the US, including one in New York City and twelve in Florida:

A diverse team of Israeli players and coaches will be flying to the U.S. to share their personal stories about how their lives were turned around by the ITC. This is especially important right now when one considers the results of a recent UNICEF study on poverty. Their report indicated that an alarming 35.6%, one out of every three children, are living in poverty. That is the fourth highest level among all developed nations.

In response, ITC programs go far beyond helping children become better tennis players. The real focus is on changing children’s lives every day so they become better human beings. Through its social impact programs, a wide range of children are served, including youth at risk, immigrants and children with special needs, from autism and ADHD to Down Syndrome as well as those with developmental and physical disabilities. Tennis has the unparalleled ability to bring together children from different religions in coexistence programs, promoting understanding, cooperation and friendship on and off the court.

The Israeli players include Oshri, a 12-year-old Ethiopian whose family came to Israel in 2011, and Elad, a 28 year old born with Down Syndrome who has been playing at the Samson Israel Tennis Center in Beer Sheva for the past 11 years.

While Oshri dreams of one day being the first Ethiopian player to represent Israel in Davis Cup tournaments, his current thoughts are all about the horrible ordeal he and others at the ITC faced during this past summer’s rocket attacks from Gaza. Thanks to the support of ITC donors, Operation Safe Haven was able to relocate Oshri and his peers to more northern centers where they could maintain some semblance of normalcy.

For Elad, it’s more than his impressive wins on the court at both the National Special Olympics Tournaments and the World Games for Special Olympics. Thanks to the ITC and the tremendous impact it has had on his life, Elad has been able to fulfill his lifelong dream of serving in the Israel Defense Forces as his brothers did before him. As Elad’s father Yossi proudly said, "The Israel Tennis Centers has given him confidence and a feeling of independence that he never had before…all thanks to the ITC.”

To learn more about Oshri, Elad and the many other children who have been empowered by the ITC, click on the following link: http://www.israeltenniscenters.org/category/where-the-money-goes/children-stories/

For more information or to attend any of the events, contact ITC Development Director Yoni Yair at 954-480-6333 or yyair(at)israeltenniscenters(dot)org.

The Israel Tennis Centers Foundation (ITC) is a 501 (c) 3 not-for-profit organization that works tirelessly through the medium of sport to enhance the development of Israeli youth. Since opening its first center in Ramat Hasharon in 1976, the ITC has helped almost a half million children, many of whom come from outlying development towns throughout Israel. The ITC’s 14 centers stretch from Kiryat Shmona on the Lebanese border in the North to Beer Sheva bordering the Negev Desert in the South. http://www.israeltenniscenters.org.