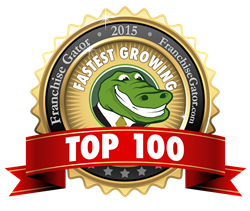 “We are extremely pleased with our current rate of growth. It is truly an honor to offer this business opportunity to a growing number of entrepreneurs seeking business success in the franchise industry.”

At the beginning of January, Franchise Gator released their Top 100 Franchise Opportunities. “The research that went into the Franchise Gator Top 100 identified two sub-groups that we felt should be highlighted,” said Eric Bell, general manager of Franchise Gator. “For the Fastest Growing Franchises list, we identified 34 franchises based on the number of opening and operating units over the past several years. Additionally, we feel these brands have been successful in building a solid customer base and gaining the trust of investors. Therefore we feel this makes them sound investments for potential franchisees.”

The Grounds Guys who began franchising in 2010, now have almost 200 franchises in the United States. “Newer and less well-known franchises have to work hard to differentiate themselves from other brands,” said Bell. “We believe that the 23 franchises we highlighted on this list have shown enough that they need to be a part of the conversation for those conducting a search for the right franchise opportunity.”

The Franchise Gator Top 100 was created to help franchising prospects limit potential risks when searching for the right opportunity. The lists were created with a focus on the average visitor to the franchise gator website. “We understand that most potential franchisees aren’t candidates for purchasing a $1 million business which is why we have identified opportunities we see as not only having strong growth potential, but are also more affordable investments for the average franchise buyer,” said Bell

“We are honored to be recognized by Franchise Gator as a fast growing franchise,” said Chris Elmore, President of The Grounds Guys. “We are extremely pleased with our current rate of growth. It is truly an honor to offer this business opportunity to a growing number of entrepreneurs seeking business success in the franchise industry.”

The Grounds Guys are slated for continued growth in the first quarter of 2015.