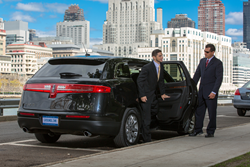 “This past year has been a particularly arduous one for road warriors, as reflected in our survey,” said Dean Sivley, CEO of GroundLink.

Corporate travel planners are often the first to hear of business travelers’ gripes and complaints. According to travel managers surveyed, the complaint most frequently heard around the water cooler is delayed/cancelled flights (44.4 percent).

“This past year has been a particularly arduous one for road warriors, as reflected in our survey,” said Dean Sivley, CEO of GroundLink. “The number of airline service complaints rose 17.9 percent in 2014 to 15,532, up from 13,176 a year before, according figures just released by the Department of Transportation (DOT).”

“In reality, employees are at a much greater risk traveling on the road, versus traveling by air,” Sivley said. “In 2013, there were 265 air-carrier-related deaths compared to 1.2 million traffic related deaths. In fact, road accidents are one of the leading reasons for medical evacuation of travelers from foreign countries according to International SOS research. It’s all the more reason to consider chauffeured transport, with professional, licensed drivers when traveling on company business. ”

GroundLink is a tech-enabled black car service provider focused on the needs of frequent and business travelers, corporate travel managers and travel arrangers.

Operating in every major city worldwide, GroundLink delivers high quality reliable transportation and the industry’s only on time guarantee. Customers can book GroundLink rides online at http://www.groundlink.com, through its iPhone and Android app, and its 24/7 call center (855.463.7150). GroundLink has offices in North America and Europe, with its headquarters in New York, NY. Connect with GroundLink on Twitter @GroundLink and on Facebook.com/GroundLink.