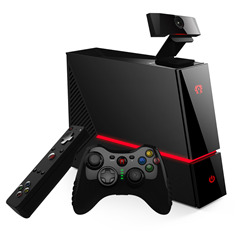 Engaging experience at a competitive price

With our partnership with Extreme Reality, we'll deliver staggering interactive motion experiences to the owners of Warchief.

Extreme Reality, the only company to provide 3D motion control on any webcam and platform, announced today that its technology will be available on Warchief, an Android-based TV game console developed by Xiaocong Network Limited and Qihoo 360. The console was launched beginning of January 2015 in China.

"With our partnership with Extreme Reality, we'll deliver staggering interactive motion experiences to the owners of Warchief," said Zhang Weiming, CEO of Xiaocong "Using a single 2D webcam enabled us to keep a competitive price while not having to settle on quality and content."

Warchief Android Console will include a wide variety of games that are controlled in various ways. Some games will be controlled by classic game controller or Xiaocong's unique absolute pointing controller with built-in G-sensors/gyros while others will use full body motion. A selection of games will be powered by Extreme Reality, ranging from sports to dance motion games.

"We are proud to be a part of the Warchief game console that offers advanced features to consumers. This partnership with Xiaocong will result in high quality motion controlled games becoming available to audiences across China without the need for a high cost 3D camera," said Asaf Barzilay, CEO of Extreme Reality.

With Extreme Reality's technology integrated in an Android game for Warchief game console, all a player needs to do is select the game and take two steps back while facing the console's webcam. The motion of the player’s body will be captured and analyzed in real-time, enabling their motion to control the game and allowing them to play in front of the TV while enjoying an immersive motion control experience.

Offered as an SDK, Extreme Reality’s Extreme Motion is the only technology to provide full-body, software-based, motion analysis and control to any computing device or operating system via a standard 2D webcam. This patented technology allows developers to easily add motion control their existing games or applications and to create a wide range of new experiences for gamers everywhere.

Developers interested in integrating Extreme Motion technology into their games or apps can visit the Extreme Reality Developer Zone at http://www.xtr3d.com/developers.

Developers interested in adding their game to the Warchief games portfolio can submit their game here: http://www.xiaocong.tv/

About XiaoCong Networks
Xiaocong (Shanghai Xiaocong Network Technology Co., Ltd.) is China's leading video game service provider, the Xiaocong video game platform based on Android has been successfully installed more than eighteen million in smart TV and set-top boxes. With the arrival of Xiaocong’s “Warchief” launched in Beijing on January 6th, 2015, gamers saw the introduction of a persistent and cost effective groundbreaking model that stirs up a real revolution in console gaming. Shanghai Xiaocong Network Technology Co., Ltd. was founded in December 2011 and is currently located in Shanghai City of China. (http://www.xiaocong.tv)

About Extreme Reality
Extreme Reality enables a future where people interact with computing devices through the motion of their bodies. It is the only company to provide full-body, software-based, motion analysis and control to any computing device or operating system via a standard 2D camera. Offered as a software development kit (SDK) and with 21 patents granted worldwide, the company's Extreme Motion product enables developers to create a wide range of applications that pioneer Natural User Interfaces (NUI), while breaking the physical barriers of current hardware-based technologies. Extreme Reality was founded in 2005 and is based in Herzelia, Israel. (http://www.xtr3d.com)