Hakka Logs is building a real­-time view of the development ecosystem, the first project­-based graph network for software engineers. 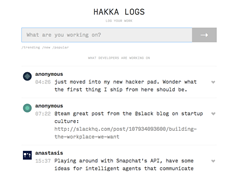 Hakka Logs is the first place where engineers can share the details of what they are working on and what they’re interested in, and use that data to discover other like-­minded developers in real-time

After bootstrapping for two years, Hakka Labs, the one-­of-­a-­kind engineering community for technology companies and professionals announced today the completion of a $500,000 angel funding round. Investors include Ali Rowghani, Partner at Y Combinator; Social Starts, early investors in Pinterest; Azure Capital; and Angel Island as well as other angel investors. Hakka Labs is the first investment of Angel Island, a fund started by Raffi Krikorian, former VP Platform Engineering at Twitter, and Chris Fry, Former Senior VP Engineering at Twitter.

The new funds will be used to further build out Hakka Logs, the first project­-based graph network for software engineers. ​With Hakka Logs, developers keep track of what they are working on and share their current projects and future interests. This project graph brings the pulse and direction of the developer community to the surface on a global scale.

“We saw that, in the real world, developers like to connect with each other around projects they are working on. This is why engineering meetups are so popular in San Francisco and New York,” said Pete Soderling, the founder of Hakka Labs. “Hakka Logs is the first place where engineers can share the details of what they are working on and what they’re interested in, and use that data to discover other like-­minded developers in real-time.”

Hakka has extensively built out its community of software engineers, reaching more than 400,000 developers and hosting 150 company profiles last year. The company is now focusing on building the right tools to better connect them with each other.

With over 40,000 regular monthly active users and engineering profiles for more than 150 companies, Hakka Labs maintains the definitive location for engineers to showcase their work. Companies like Spotify, Bitly, Handy, and others already trust Hakka Labs to build their engineering brand.

“Hakka Labs used their platform and broad network of engineers to help us tell our engineering story and get conversations started,” said Chris Angove, Chapter Lead at Spotify. “They give us the tools we need to build relationships with an expanded community of developers.” Now Hakka is leveraging its network to build meaningful tools for developers to connect with each other.

As Raffi Krikorian, current investor in Hakka Labs and former VP of Platform at Twitter points out: “The free and open exchange of information makes the world smaller. Ideas simply get better as more and more people challenge them, iterate on them, and flesh them out.”

“As the software industry moves faster than any team can keep up with, the only way to keep making solid technology decisions is to tap into what is going to happen,” said co­-founder Julia Neznanova. “This means looking at what developers are working on today and planning for tomorrow, not what they pushed yesterday.”

Hakka Logs received great early traction on Reddit, attracting more than 13,000 developers. The platform is currently in Alpha: go to http://HakkaLogs.co to request an invite.