Electric Vehicles seem to be here to stay with California estimating an additional 40,000 new charging stations in the next 4 years. NCWM is responding with new standards that will provide the same consumer protection we enjoy at the gas pump. 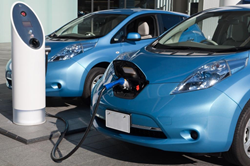 These stations will require inspection and testing for accuracy, just like any gas station today.

From the “Electric Highway” of the west coast to the metropolitan centers across the country, electric cars are becoming more common place. Weights and measures officials are gearing up to provide owners of these vehicles the same assurances they provide drivers of fossil fuel-powered vehicles: that they are getting what they pay for when “filling up”.

“As the number of electric powered vehicles increases within the U.S., the need for workplace and public charging will continue to expand,” says Kristin Macey, Director of the California Division of Measurement Standards. “In many states, the regulation of public charging will be the responsibility of weights and measures officials.”

To date, forty percent of all electric vehicles sales in the U.S. have been in California. The California Energy Commission predicts that an additional 40,000 public access charging stations will be needed within four years. “These stations will require inspection and testing for accuracy, just like any gas station today,” said Macey.

As the marketplace infrastructure is developed it will be essential to address accuracy, labeling, and advertising requirements. Consumers will benefit from a consistent purchasing experience and manufacturers will have known design specifications.

The National Conference on Weights and Measures (NCWM) established the kilowatt hour as the appropriate method of sale of electricity for electric automobiles, effective January 1, 2014. This was at the recommendation of a U.S. National Working Group established by the National Institute of Standards and Technology (NIST) and composed of industry leaders, state and local weights and measures officials, and technical staff from the NIST Office of Weights and Measures. By establishing the measured units of sale, consumers are now able to make price comparisons just as they do for gasoline.

At its 100th Annual Meeting in July 2015 in Philadelphia, NCWM will vote on additional recommendations from the NIST work group that would establish standards for recharging stations including accuracy requirements, testing procedures by weights and measures officials and design and installation requirements such as indications, labeling and security from tampering. All of this will enable the same level of regulatory oversight that already exists for gas pumps. If adopted by NCWM in July, those model standards will be published in NIST Handbook 44 and enforceable effective January 1, 2016.

NCWM is responsible for establishing uniform standards for commercial weighing and measuring practices in all sectors of the marketplace from packaging and labeling to the full range of commercial scales and meters. Technological advancements are fast-paced so NCWM relies on the expertise of industry and regulators to keep pace.

Carol Hockert, Chief of the NIST Office of Weights and Measures (OWM) explained, “NCWM and NIST have worked in partnership since 1905 to develop standards covering commercial weighing and measuring practices. It is a never-ending task as manufacturing, marketing and new technologies rapidly evolve.” OWM personnel at NIST serve as technical advisors on NCWM Committees and serve as liaisons between NCWM and federal agencies. These two organizations are devoted to a common cause: strengthening the nation’s weights and measures infrastructure and in doing so, protecting consumers and giving business owners a level playing field through fair competition,” said Hockert.

The National Conference on Weights and Measures is a professional nonprofit association of state and local weights and measures officials, manufacturers, retailers and consumers. In 1905, NCWM was formed to develop model standards for uniform enforcement from city to city and state to state. The organization has set the example for bringing the right interests to the table to develop and amend national standards to keep pace with innovative advancements in the marketplace.