The following is a statement from Adora Obi Nweze, President of NAACP Florida State Conference and Miami-Dade Branch, regarding a proposal to include Confederate Veterans in Florida Veterans’ Hall of Fame. 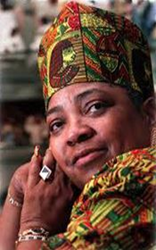 Including Confederates in the Florida Veterans’ Hall of Fame would be like a modern declaration of civil war by the State of Florida.

The following is a statement from Adora Obi Nweze, President of NAACP Florida State Conference and Miami-Dade Branch, regarding a proposal to include Confederate Veterans in Florida Veterans’ Hall of Fame.

“At a Cabinet meeting in Tampa earlier this month, the Governor and Cabinet were presented with the names of five veterans – one deceased and four still living, including the first African-American inductee – whose honorable service to our nation and significant contributions to Florida’s history were considered praiseworthy. However, the state leaders were not presented with the names of three Confederate veterans, who were deemed ineligible for induction because of their service in rebellion against the United States. It would be better to honor the Floridians who bravely served to keep our nation together, uphold our Constitution and bring the promise of liberty to people in Confederate bondage.

“In order for a veteran to be inducted into the Florida Veterans’ Hall of Fame, he or she must have been honorably discharged after serving in either the United States Army, Navy, Marine Corps, Air Force or Coast Guard – a requirement none of the three Confederate soldiers meets.

“While these three Confederate soldiers went on to distinguished achievements after the South lost in the Civil War, they do not meet the basic criteria of having served, and been honorably discharged, from the United States military.

“The Confederacy fought to tear apart our country, in support of savage slavery, in a misguided, hateful attempt to uphold that abomination. The dark stain of slavery is undeniably a part of American and Florida history that should be remembered and studied. But to have these men honored in a memorial at the state Capitol for their service on the wrong side of history would be an injustice to the descendants of enslaved Americans and an insult to all Americans who have bravely served our country with honor. Honoring the Confederacy does nothing but reopen the scars of racism and division that, a century and half later, are still not healed.

“Including Confederates in the Florida Veterans’ Hall of Fame would be like a modern declaration of civil war by the State of Florida. It would be akin to flying the Confederate Flag over the state Capitol again.

“That is why we have initiated a Change.org petition to generate opposition against efforts to salute Confederate soldiers by giving them the state’s highest honor, which should be reserved for U.S. military veterans. The petition, which can be found at http://tiny.cc/VeteransHallOfFame, will be submitted to the Governor, Cabinet and Legislature.

“The law and common sense make it clear that Confederate soldiers should not be inducted into the Hall of Fame. Looking through the clear lens of history shows us that our leaders must stand on the side of those who were emancipated, not on the side of those who fought to continue enslavement in America. History has spoken and Confederate rebels do not belong in a Hall of Fame honoring American soldiers.”