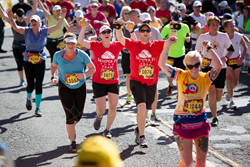 My son was injured in May of 2006 and Semper Fi Fund supported me every month. . . Knowing how much that helped me makes me want to fundraise even more so I can help another mom.

Semper Fi Fund (SFF) is honored to be a charity partner of the Marine Corps Marathon, an unforgettable race that promotes physical fitness, generates community goodwill, and showcases the organizational skill of the United States Marine Corps. For five consecutive years, SFF has been honored to be the event’s largest charity partner, with over 900 participating athletes in 2014 competing to raise funds and awareness for wounded, critically ill and injured service members. Registration is officially open and underway—and the veteran non-profit is looking to make 2015 its biggest year ever!

Last year, more than 150 injured veterans from Team Semper Fi (TSF) and Team America’s Fund (TAF) participated in the Marine Corps Marathon. Part of The Peter Murphy Sports Program, TSF and TAF were founded on the idea that competitive sport fosters recovery through community and camaraderie, and are an important extension of the assistance the Semper Fi Fund provides. Many of these athletes ran on prosthetics, or used adaptive equipment to complete the 26.2-mile journey.

Rounding out the SFF contingency were hundreds of community athletes from around the world, training, fundraising and sharing the SFF mission with their family members, friends and coworkers.

"My son was injured in May of 2006 and Semper Fi Fund supported me every month so I could still pay my bills and not lose my home,” said GiGi Windsor, SFF Community Athlete. “Knowing how much that helped me makes me want to fundraise even more so I can help another mom."

As SFF Community Athlete Patti Haley sums it up, “If these guys can do it on one leg, who am I not to do it on two?”

“Year after year, the Marine Corps Marathon is one of our absolute favorite events,” said Karen Guenther, President and CEO, Semper Fi Fund. “It is a wonderful way for all of us—service members, friends, family, volunteers, fundraisers, and staff—to come together for one very special weekend in support of our wounded, critically ill and injured. We’ve been the largest charity partner for five straight years; we can’t wait to make it six!”

About Semper Fi Fund and America’s Fund
Semper Fi Fund, and its program America's Fund, provide immediate financial assistance and lifetime support for wounded, critically ill and injured members of the U.S. Armed Forces and their families, directing urgently needed resources to post 9/11 service members of the Army, Marine Corps, Navy, Air Force, Coast Guard, and Reserves. Since its inception in 2004, the Semper Fi Fund has provided more than $102 million in assistance to over 13,300 service members and their families. The Semper Fi Fund's streamlined structure keeps overhead very low, 6%; they are also one of three veteran charities to receive an "A+" rating from The American Institute of Philanthropy, and a four-star rating from Charity Navigator.

The Semper Fi Fund provides the team with coaches, specialized sporting equipment, entry fees, and travel expenses to athletic events. Athletes are also given the opportunity to receive high-level training from former and current Olympic and Paralympic athletes through the US Paralympics.