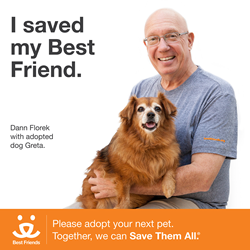 Dann Florek may have been tough as nails as Captain Donald Cragen on television dramas “Law & Order” and “Law & Order: Special Victims Unit,” but in real life the actor has a serious soft spot for homeless pets.

Florek says that in his home, it is his rescued dogs that capture the spotlight. Now Florek is urging Americans to join national animal welfare organization Best Friends Animal Society in the drive to save the lives of shelter dogs and cats.

"Over the years my wife and I have rescued all of our dogs (six and counting), and they've all enriched our lives in unexpected ways. Some were comedians, some were therapy dogs, but they all were loving companions and important members of our family,” Florek said. “Our lives are better for having rescued these dogs. If you are thinking about getting your own best friend, please consider adopting. If we do this together, we can indeed save them all."

In his career, Florek has performed in more than 70 plays, including works by Shakespeare, Neil Simon and Harold Pinter. His movie career lists such films as “Sweet Liberty,” “The Flintstones,” “Angel Heart” and “Hard Rain.” He is probably best known, however, for his work in television. In addition to the “Law & Order” series, Florek is a familiar face from series such as “Hill Street Blues,” “Roseanne,” “From The Earth To The Moon,” “Smart Guy,” and “NYPD Blue.”