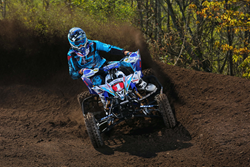 Leading the MX teams for Yamaha in 2015 is three-time AMA Pro ATV champ Chad Wienen on his Wienen Motorsports/SSI YFZ450R. He is looking forward to starting his title defense at the inaugural Daytona SX event. Maxxis/Moto-XPerts Thomas Brown, who took third in AMA Pro ATV competition in 2014, returns to Yamaha again this season and also has his sights set on a 2015 championship.

In Grand National Cross Country (GNCC) competition, N-Fab/Am-Pro/Moto-XPerts Yamaha’s veteran Walker Fowler will once again challenge for the XC1 pro class championship after only missing that mark by mere seconds this past October. Maxxis/SSI Chris Borich, who has won the past six straight GNCC pro championships has made the switch to Yamaha and will be on a YFZ450R this year, while N-Fab/Am-Pro/Moto-XPerts Yamaha’s Cole Richardson, who captured the XC2 class championship with eight wins in 2014, will be looking for a repeat.

“Yamaha has a long history of supporting ATV motocross and cross country racing and we have assembled an even stronger team of riders to add to the legacy of the Championship winning YFZ450R this season,” said Donnie Luce, Yamaha’s Off-Road/ATV Coordinator.

In addition, Yamaha will be supporting Kylie Ahart in GNCC competition as the first-ever Yamaha All-American ATV Racer. Kylie was voted to this position by her peers, friends and fans as a person and racer who embodies All-American ATV Racing values. She was awarded a complete racing package from Yamaha and GNCC and will represent Yamaha in the 2015 GNCC season on a new YFZ450R in the WXC class.

“Yamaha is proud to continue supporting ATV racing more than any other OEM. The All-American ATV Racer program is just the latest example of this support, and everyone at Yamaha is excited to see our team riders and Kylie compete on the Assembled-in-U.S.A. YFZ in 2015,” said Steve Nessl, Yamaha’s ATV and SxS group marketing manager.

Yamaha continues to lead the sport ATV market in sales, premier class championships and support. A key part of that support is provided by Layne Barnes and the staff of Pro Motorsports from Mt. Pleasant, Iowa, through our trackside support program that is available to all Yamaha riders at each stop of the AMA ATV nationals.

Headquartered in Cypress, Calif., since its incorporation in 1976, Yamaha also has facilities in Wisconsin and Georgia, as well as factory operations in Tennessee and Georgia. For more information on Yamaha, visit http://www.yamahamotorsports.com.

ATVs over 90cc are recommended for use only by riders 16 years and older.