Happy Hormone Cottage of Kettering, Ohio is first in central and southwestern Ohio to acquire the Thyroflex to test women's thyroid levels. Thyroflex is FDA-approved and has a 98.5 to 99 percent accuracy level; results help doctors determine dosage for prescription thyroid medicine. 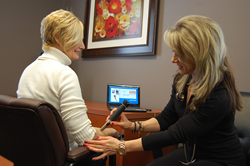 “Once thyroid therapy has been initiated, re-testing can be performed to titrate to the proper and effective dose of thyroid,” said Hogrefe. “Having the proper amount of thyroid entering the cells is critical to improve symptoms of low thyroid.”

The Thyroflex tests women’s thyroid levels with 98.5 to 99 percent accuracy. It is FDA approved.

The thyroid is a butterfly-shaped endocrine gland in the base of the neck that monitors metabolism and controls many of the body’s systems from brain to bowel to libido and fertility.

One in eight women will develop a thyroid disorder during her lifetime, according to the American Thyroid Association. Low thyroid is a hereditary condition that can also cause fertility problems, miscarriages, premature births and severe developmental problems in children.

“Over the past five years, women have been seeking us out to get their hormones checked and then balanced,” said Lyn Hogrefe, CEO at Happy Hormone Cottage. “The focus has been mainly on balancing estrogen, progesterone, testosterone and cortisol. The Thyroflex acquisition allows us now to test and educate women on thyroid, too.”

Until now, testing thyroid was always a challenge because the firm was limited by the use of blood tests for testing TSH, T3, and T4 in men and women, said Hogrefe.

The problem with current thyroid blood testing is that it doesn’t acknowledge the role of thyroid in the body, said Jeff Hogrefe, a pharmacist and owner of the Piqua Compounding Pharmacy in Piqua, Ohio. Hogrefe holds an Advanced Fellowship in Anti-Aging and Regenerative Medicine from the American Academy of Anti-Aging Medicine in Boca Raton, Fla.

The Hogrefes are husband-and-wife advocates of functional medicine who own complimentary businesses.

“Thyroid does not have any effect in the blood, said Jeff Hogrefe. “In order for thyroid to be effective, it must leave the blood and enter the cells. Once inside the cells, thyroid (T3) travels to the mitochondria (think energy factory) and is involved in a complicated chemical reaction to produce energy for the cell.

“Without thyroid, there is a significant lack of energy and the cell either loses function or dies. There are a great many processes that effect thyroid’s ability to get in the cell and work its magic. When testing only blood, the assumption is that all these processes are working effectively and this clearly isn’t the case. This is why so many women don’t feel their thyroid medication is working.”

The Thyroflex is a four-minute, FDA-approved test that measures the speed--in milliseconds-- of a reflex in the arm.

During an in-office evaluation, a small hammer connected to a computer is used to strike the brachioradialis tendon located near the elbow. The computer measures the rate and caliber of the reflex response to determine thyroid function. The longer it takes for a reflex response, the more thyroid hormone a person generally needs, said Hogrefe.

The Thyroflex was invented by Dr. Daryl Turner, a native New Zealander now living in Arizona who has developed a number of non-invasive medical testing devices and medications and founded organizations including NiTek Medical Group; the Thyroid and Adrenal Research Institute; and For Need nonprofit organization.

The Thyroflex has been featured on the nationally-syndicated Dr. Phil show and mentioned in mainstream functional medicine books.

“Most general practitioners know that TSH is not a good indicator of thyroid levels,” said Turner. “But that is the way they were taught and why some still use blood tests.”

Turner said medical experts have estimated that up to 80 percent of men and women have low thyroid levels. “Women tend to be more aware of the lethargy and fatigue, weight and menstrual problems caused by low thyroid than men,” he said. “Men tend to brush it off, but women tend to talk about it.”

Lyn Hogrefe said that women who have had blood tests for thyroid issues are often told that they test “normal,” but when they are tested on the Thyroflex machine, they typically test low.

Additionally, she said women diagnosed with low thyroid, or hypothyroidism, have told her they felt they were undertreated because they did not experience improvement when taking thyroid medication.

“Once thyroid therapy has been initiated, re-testing can be performed to titrate to the proper and effective dose of thyroid,” she said. “Having the proper amount of thyroid entering the cells is critical to improve symptoms of low thyroid.”

Lyn Hogrefe said it’s important for cortisol issues and estrogen/progesterone balance to be addressed simultaneously because they can have a dramatic impact on thyroid function.

“Although not our current recommendation, we will test new clients for thyroid function if they are symptomatic or feel they have been inadequately treated with thyroid therapy,” said Lyn Hogrefe. “As always, the Happy Hormone Cottage's mission statement is ‘women helping women for wellness.’ We are all about educating women so they can own their journey to their best health naturally.”

Happy Hormone Cottage has offices in Kettering, Mason, Piqua, and Vandalia, Ohio and Crestview Hills, Ky. It has helped more than 6,000 women achieve hormone balance over the past five years.

Cost of Thyroflex testing is $60, plus the cost of a nurse practitioner's fee. Testing is conducted in the Mason and Kettering offices only.

For more information, email http://www.happyhormonecottage.com, or schedule an appointment at (513) 444-6343.

Happy Hormone Cottage, LLC is dedicated to helping women get tested, treated and better through the use of Bioidentical Hormone Replacement Therapy (BHRT).