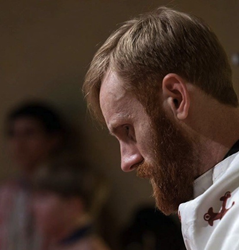 Greek Orthodox theologian succumbs to injuries in Connecticut car crash. Fr. Matthew Baker died on Route 2 in Norwich after he lost control of his van in the snow. He is survived by six children and his stay-at-home wife who is now in the winter storm of mourning and anxiety. She is alone worrying about the security of her family without income.

An ad hoc national network of Greek Orthodox community members sprang up overnight. They set up a Go Fund Me campaign to support the family with children ages 2-11. The campaign has raised $432,000 of its $750,000 goal in its first two days online, and it encourages participation from selfless strangers of all faiths and from persons with or without connections to the family.

"He was very quick to form deep relationships. It was very easy to talk to him, and to feel as if you had known him for a very long time," said Fr. Nick Dellermann, of St. Nicholas Church in Norwich.

Police said Matthew Baker, of Danielson, lost control while driving a 2002 Dodge Caravan west on Route 2 just before 4 PM Sunday. He was thrown from the van when it crossed into the snow-covered median. He rolled several times before stopping on the east side of the highway. His children were in the car, but they only sustained minor injuries.

“Promising. Brilliant. Down-to-earth. Genius. Important. Animated. Passionate. These are all words that I have heard used—and myself used—to describe Fr. Matthew,” said Fr. Andrew Stephen Damick, a close friend of the deceased. “… he was someone that people would be hearing about if they hadn’t already… he was already one of the best scholars that Orthodoxy in America had seen in a long time.”

Years of deferred income while in seminary were the price of his dedication to faith. At 37 years old, his life was starting to bloom just before his young family lost their breadwinner. He had just been appointed to his first sustaining post. The Greek Orthodox Metropolis of Boston had reassigned him to the Holy Trinity Parish of Norwich, CT.

His wife, Presbytera Katherine, is quoted saying she is overwhelmed by the outpouring of generosity in her family’s moment of need, but she cautions that she and her children will need help over the long term, and not just over the course of 24 hours.

The Greek Orthodox Metropolis of Boston set up its own fund to help the family the same day as the father’s passing.

The Local NBC Connecticut affiliate published this video about the man and the crash that took his life.