Author Dave Walsh is launching his brand new science fiction book series -- Andlios -- on March 24th with the release of the first novel in the series; Terminus Cycle. Terminus Cycle will be released on Amazon Kindle and is available for pre-order now. 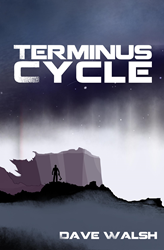 On March 24th author Dave Walsh is set to launch his brand new science fiction novel series, Andlios, with the release of the first novel in the series; Terminus Cycle.

Humanity never stopped growing or using resources, leaving Earth in crisis. The solution was a mission to send ships of immense proportions out into the expanse of space to colonize neighboring planets.

Jonah Freeman was born into the lowest rung of society aboard the Omega Destiny. He fought and clawed his way out of poverty only to find himself uncovering a conspiracy about the mission and their destination planet that could alter humanity’s history forever. On the other side of the Omega Destiny was Captain Peter O’Neil, born into wealth and the honor of being the Captain that would land humanity on its new home planet.

Freeman and O’Neil were born on different sides of the spectrum aboard the Omega Destiny but their lives are on a collision course all while their new home planet of Omega looms in the distance, growing closer and more mysterious every day. What greeted them when they arrived was not only shocking, but more dangerous than they ever imagined.

Terminus Cycle is set to be released on March 24th on the Amazon Kindle platform. It is available for pre-order now.

About the Author
Dave Walsh is a writer residing in Albuquerque, New Mexico who is best known for his work as a Kickboxing and Mixed Martial Arts journalist. His work has been featured on a number of publications including BloodyElbow.com, MiddleEasy.com, CageSideSeats.com, Heavy.com as well as his own site, LiverKick.com. His first novel, The Godslayer, was released in January of 2013.