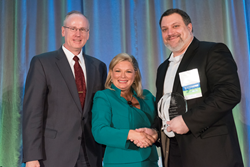 Each of (the nominees) exhibits the innovation and ingenuity for which the ISE® Awards stand...

Pete Chronis, chief security officer for EarthLink, was selected as the Information Security Executive® of the Year Award winner for the ISE® Southeast Region. Pete is an industry veteran with over 15 years of experience using technology to manage risk in the telecommunications, healthcare, financial and IT services industries. In the last year, Chronis has transformed the security organization at EarthLink into a security practice focused on launching new customer-facing security products that drive new revenue opportunities. Under his leadership, his team developed patent-worthy innovations, implemented platform enhancements designed to thwart massive DDoS attacks and helped customers proactively remediate high-risk security vulnerabilities that could have resulted in over 22,000 data breaches.

Jabil’s “Security-as-a-Service” project was selected as the ISE® Southeast Project of the Year. Troy Riley, IT security program manager, accepted on behalf of the project. Jabil created and adopted a portfolio of security-as-a-service solutions in order to better protect and secure the company’s critical information. The project – which addressed application access, data loss prevention and external threats – enabled Jabil to close security gaps, leverage its security technology and practices as a market differentiator, and create a competitive business advantage in the marketplace.

“Our judges faced a difficult challenge in evaluating such a high caliber group of executive and project nominees,” said T.E.N. CEO and President Marci McCarthy. “Each of them exhibits the innovation and ingenuity for which the ISE® Awards stand and we are honored to have each and every one of join the ranks of our distinguished ISE® Alumni.”

Our distinguished ISE® Judges are past nominees representing a cross section of industries, including commercial, government, health care and academic sectors. For this reason, the ISE® Awards represent the best achievements of the year as evaluated by those regarded as the industry's most influential and successful thought leaders. Coupled with a one or two-day executive summit, the ISE® Awards are held across the country and Canada in major cities including Atlanta, Chicago, Dallas, New York and San Francisco. The ISE® Awards Program Series has reached more than 10,000 executives across a broad range of industries and has been a major influence in executives’ careers, knowledge sharing, and the development of peer-to-peer relationships.