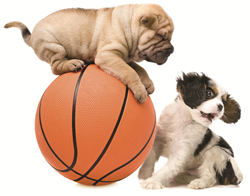 This year’s NCAA Men’s Basketball Tournament has an animal loving vibe with 12 teams sporting dog or cat related nicknames. But which team will have the pet power to cut down the nets on April 6 in Indianapolis? Will it be the Wildcats – Kentucky, Villanova or Arizona? Or, will the championship go to the dogs – Gonzaga, Virginia or Butler? To predict the 2015 champion, Veterinary Pet Insurance Co. (VPI), the nation’s first and largest provider of pet health insurance, analyzed its database of more than 525,000 insured pets to determine the March Madness winner based on pet name popularity.

Below is a list of the most popular pet names based on the teams participating in the 2015 NCAA Men’s Basketball Tournament (total number of pets sharing that name in parenthesis):

The tournament will have plenty of canine support with the following breeds being represented:

Cats litter the March Madness brackets as well, including:

About Veterinary Pet Insurance
With more than 525,000 pets insured nationwide, Veterinary Pet Insurance Co./DVM Insurance Agency (VPI), a Nationwide company, is the first and largest pet health insurance provider in the United States. Since 1982, VPI has helped provide pet owners with peace of mind and is committed to being the trusted choice of America’s pet lovers.

VPI plans cover dogs, cats, birds and exotic pets for multiple medical problems and conditions relating to accidents, illnesses and injuries. Wellness coverage for routine care is available for an additional premium. Medical plans are available in all 50 states and the District of Columbia. Additionally, one in three Fortune 500 companies offers VPI Pet Insurance as an employee benefit.