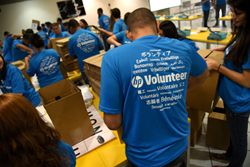 Our objective is to provide nutritional meals to the Food Bank of Puerto Rico, so they can support all NGO’s in Puerto Rico who serve the less fortunate.

Stop Hunger Now and Hewlett-Packard are teaming up again in the fight against hunger. More than 300 employees will package meals for the world’s hungry on March 20th at HP Caribe in Aguadilla Puerto Rico. This event is in conjunction with a campaign by HP to package over 1 million meals around the world in 2015. In 2014 over 4,500 HP employees packaged approximately 1.5 million meals at 21 HP sites around the world.

“Today is a significant day for the Hewlett-Packard Puerto Rico Family,” says David Trabal, Human Resources Director. “Our objective is to provide nutritional meals to the Food Bank of Puerto Rico, so they can support all NGO’s in Puerto Rico who serve the less fortunate.”

Founded in 1998, Stop Hunger Now has delivered aid and disaster relief supplies in the form of food, medical supplies, clothing, school supplies and more to thousands of disaster victims and other hungry and vulnerable people in 65 countries.

“What we want everyone to know is that hunger is solvable and is the common thread among the world’s most challenging issues. When hunger is targeted, you give leverage and hope to every other cause including poverty, disease, education and the welfare of women and children,” said Rod Brooks, President and CEO of Stop Hunger Now.

The event will be hosted at HP Caribe in Aguadilla from 8:30 a.m. until 10:30 a.m. Meals packaged at the event will be distributed to Puerto Rico’s Food Bank. More than 300 employees will join together and accomplish this goal in just two hours. For information about the event, please contact Nilda Prieto at HP Caribe, 787-685-4509 or by email at nilda.prieto(at)hp(dot)com.

For more than 15 years, Stop Hunger Now has been creating a movement to end hunger with more than 140,000,000 meals distributed along with other aid to 65 countries. Driven by a mission to end hunger in our lifetime, the organization provides food and life-saving aid to the world's most vulnerable and helps mobilize the necessary resources impacting millions of lives.