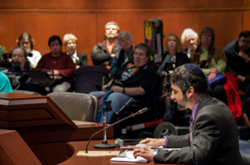 Mercilessly bullied autistic and LGBT youth can pick up this message that ‘my death’ is ‘my choice’ . . . and act on it. Those of us on the autism spectrum can take messages like this quite literally.

Both proponents and opponents of the Connecticut assisted suicide bill held press conferences on Monday at the state capitol. One speaker who opposes the legislation was Maggie Karner, a woman with brain cancer, who was quoted saying “if we endorse patient suicide as our statewide policy for dealing with pain and the financial burdens at the end of life — we’re going to end up embracing a whole new ethic that confuses compassionate medical care with a prescription for death.” (Both Sides Get Ready To Debate End of Life Issues, CT News Junkie, March 16, 2015.)

One of the leaders of Second Thoughts CT, Cathy Ludlum, was interviewed extensively about her concerns as a person with significant physical disabilities regarding the potential for "unintended consequences" and the difficulty of providing adequate safeguards. She noted that terminal prognoses can be incorrect. Regarding safeguards, “Ludlum pointed to studies that indicate as many as one in 10 seniors are victims of elder abuse. 'If you’re introducing a deadly prescription into that family situation, where no one is going to be there to see what happens, you don’t know what happened,' she said." Ludlum also noted that cost cutting pressures in health care and social services could "push some people toward ending their lives.” (On polarizing end-of-life issue, what changes minds? CT Mirror, March 16, 2015)

Second Thoughts CT disability advocates have been also preparing for a hearing on the bill before the House Judiciary Committee. The testimony of Stephen Mendelsohn, another Second Thoughts CT leader, raises serious concerns about suicide contagion in Oregon, where assisted suicide is legal. “According to the Centers for Disease Control, Oregon’s already high suicide rate has increased much more than the national average; from 1999 (shortly after the Oregon Death with Dignity Act took effect) until 2010, the rate of increase for people age 35-64 was 49% in Oregon versus 28% nationally. . . . Mercilessly bullied autistic and LGBT youth can pick up this message that ‘my death’ is ‘my choice’ . . . and act on it. Those of us on the autism spectrum can take messages like this quite literally.”

Mendelsohn’s testimony also points to the dangers of future expansion of eligibility for assisted suicide beyond the parameters in the current bill, based on public comments by assisted suicide proponents:

“When Compassion & Choices president Barbara Coombs Lee came to Hartford last October, she declared her support for assisted suicide for people with dementia and cognitive disabilities unable to consent. CT News Junkie quoted her saying, ‘It is an issue for another day but is no less compelling.’ (Compassion & Choices Draws Full House at Real Art Ways for Panel Discussion, Film, Oct. 10, 2014) Dr. Marcia Angell, leading proponent of the defeated Massachusetts’ assisted suicide ballot question, recently wrote in The New York Review of Books that she now favors euthanasia as well as assisted suicide. (“A Better Way Out,” Jan. 8, 2015.) Oregon is currently debating legislation (HB 3337) that would extend eligibility for assisted suicide from a six month prognosis to one year.”