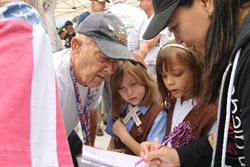 It's time for the youth of our nation to continue the work of the Greatest Generation to ensure a more tolerant, inclusive, just, and peaceful world.

Communities across the country will be honoring the legacy of the men and women of America's "Greatest Generation" this weekend by commemorating the 70th anniversary of their greatest day - August 14, 1945 - the day spontaneous celebrations broke out at the news that World War II had ended and the United States almost immediately took on the awesome task of rebuilding the post war world.

The nationwide commemorative effort has been organized by "Keep the Spirit of '45 Alive," a grassroots coalition that lobbied Congress in 2010 to unanimously vote for an annual national Spirit of '45 Day honoring the generation that grew up during the Great Depression, defended freedom and democracy in WWII, and then led an unprecedented effort to ensure a better future for both their friends and allies and former foes alike.

"The 'Spirit of '45' goes beyond courage in battle. It includes America's commitment to restore nations shattered by conflict, whether friend or foe, and to advance the cause of liberty and peace around the world," said Collins, whose father is a veteran of the Battle of the Bulge. "It describes the civic engagement, volunteerism and service to community and country that is the hallmark of the Greatest Generation."

Hollywood star Scarlett Johansson has released a public service announcement honoring the memory of her great uncle who was the last man to die in combat in WWII on the day the war ended on August 14, 1945.

America’s governors have issued proclamations in support of a Spirit of '45 70th Anniversary Commemoration Weekend that kick off with with a mass "kiss in" in Times Square on Friday, August 14 at 11 a.m. featuring WWII Navy veterans Ray and Ellie Williams of Georgia who were married on the day after the war ended. Ray served in the Pacific on the aircraft carrier USS Cowpens, aka "The Mighty Moo," that was the first to enter Tokyo Bay after Japan's surrender. Ellie was a member of the WAVES unit that escorted President Franklin Roosevelt's funeral cortege in April 1945.

More than 400 community events have been registered on the Spirit of '45 web site at http://www.Spiritof45.org. Highlights of the 70th Anniversary Commemoration Weekend include:

“I commend Spirit of ’45 for ensuring America does not forget these ‘ordinary heroes’ who not only fought the war but rebuilt our nation and much of the world in the war’s aftermath," wrote U.S. Secretary of Defense Ash Carter.

The commemoration effort will continue into the fall with a cross country convoy of WWII vehicles that will leave from Washington, DC on Saturday, September 19, and drive more than 3,000 miles across 12 states to arrive in San Diego, CA on October 18. The convoy will represent the homecoming of the millions of service men who returned to their families and communities in the latter half of 1945, and will pay tribute to the legacy of Dwight D. Eisenhower and America's Ground Forces during WWII.

In November, hundreds of youth will march in Veterans Day parades around the country, carrying poster sized photos of WWII veterans from their families and communities, to signal the beginning of the passing of the torch from the Greatest Generation to a new generation of youth leaders for the 21st century.

"President Roosevelt's 'Four Freedoms' that guided the WWII generation are still very relevant to America and the global community of nations," said Warren Hegg, Keep the Spirit of '45 Alive national coordinator. "It's time now for the youth of our country to pick up where their grand parents and great grandparents left off, and to use their skills and energy to continue their efforts to ensure a a more tolerant, inclusive, just and peaceful world."