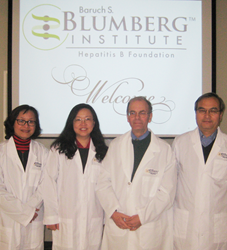 This is an incredibly exciting time in hepatitis B research, with the field poised to develop a cure.

The Baruch S. Blumberg Institute (http://www.blumberginstitute.org) has recruited a new team of nationally renowned scientists to focus exclusively on research to develop a cure for hepatitis B, a move that nearly triples its research capacity and has created the largest concentration of nonprofit scientists focusing solely on hepatitis B and liver cancer in the United States.

Four principal scientists – Drs. Timothy Block, Jinhong Chang, Ju Tao Guo and Ying-Hsiu Su – and 16 of their staff members and laboratory researchers joined the Baruch S. Blumberg Institute full-time on March 1. Establishing this first-rate scientific team of leading hepatitis B researchers lays the groundwork to support an aggressive plan to develop breakthrough therapies to combat the virus within the next three years.

“By bringing leading researchers in the field together at its headquarters, the Hepatitis B Foundation, through its research arm, the Baruch S. Blumberg Institute, is able to concentrate their joint efforts to finding new treatments and, ultimately, a cure,” said Joel Rosen, Chairman of the Foundation’s board. “In the twelve years that I have been a member of the foundation’s board of directors, I have never been more optimistic that a cure is within reach. It’s an exciting time for everyone involved.”

The researchers will build upon recent discoveries that have accelerated the momentum for developing a cure for hepatitis B and liver cancer. Those breakthroughs include the development of new screening methods to search for effective drugs, new ways to treat hepatitis B using different approaches to shut down the virus, a new blood biomarker that aids in the early detection of liver cancer, and a promising drug that selectively kills liver cancer cells in animal studies.

“This is an incredibly exciting time in hepatitis B research, with the field poised to develop a cure. The Blumberg Institute is fortunate to have attracted Tim Block and his colleagues, positioning the nonprofit institute to maintain its world-class stature in hepatitis research,” said Dr. Tom Shenk, one of the nation’s leading virologists, a professor at Princeton University, and a member of the Foundation’s Board of Directors.

Block co-founded the Hepatitis B Foundation and is the president of the Blumberg Institute. For years, he has donated his time to both nonprofit entities, working full-time as a professor of Microbiology and Immunology at Drexel University College of Medicine, where he was Director of the Drexel Institute for Biotechnology and Virology Research. He has left that post in order to dedicate all of his time and focus to the work of the Blumberg Institute.

“The years that we all have spent working towards a cure for hepatitis B have laid the groundwork for this final phase,” said Block. “We are committing everything we have, every resource at our disposal, to developing the therapies that will improve the lives of the millions of people worldwide who live with the hepatitis B virus every day, as well as the risk of dying prematurely from its most fatal consequence, liver cancer.”

With promising drugs in the research pipeline, the Hepatitis B Foundation and the Blumberg Institute have begun exploring relationships with companies that can take those discoveries from the lab to the clinic, where they can benefit people worldwide.

“The fact that Dr. Tim Block and other world-class scientists have chosen to join the Blumberg Institute in its drive to find a cure for hepatitis B speaks volumes about the Institute’s cutting-edge science and potential to impact global health,” said Wayne Yetter, former president and CEO of the multinational pharmaceutical company Novartis U.S. and a recent addition to the Hepatitis B Foundation’s Board of Directors.

In addition to the exciting implications for the world of science and medicine, the new jobs created at the Blumberg Institute are a welcome boost to the local and regional economy of Bucks County and southeast Pennsylvania.

"The Blumberg Institute's recruitment of four world-class scientists and their staff, including Dr. Timothy Block, is great news for this community,” said Bucks County state Sen. Charles McIlhinney, a longtime supporter of the organization. “The Blumberg Institute, which manages and is located at the Pennsylvania Biotechnology Center, has been responsible for breakthrough discoveries coupled with spectacular jobs and company creation, right here in Bucks County. This is the kind of growth we need.”

About the Baruch S. Blumberg Institute: The Hepatitis B Foundation established an independent, nonprofit research institute in 2003 in order to conduct discovery research and nurture translational biotechnology in an environment conducive to interaction, collaboration and focus. The research center was renamed in 2013 to honor Baruch S. Blumberg, the man who won the Nobel Prize for his discovery of the hepatitis B virus. To learn more, visit blumberginstitute.org.

About the Pennsylvania Biotechnology Center: The Pennsylvania Biotechnology Center of Bucks County offers state-of-the-art laboratory and office space to nonprofit research companies and biotech companies. Created by a partnership between the Hepatitis B Foundation and Delaware Valley College, and managed by the Blumberg Institute, the Center was funded in part by the Commonwealth of Pennsylvania. The facility opened in 2006 in a formerly abandoned warehouse and has since grown to encompass 110,000 square feet on a 10-acre campus. To learn more, visit pabiotechbc.org.