120 of the world’s leading experts, representing 16 countries, have united to express their shared support for the fundamentals of healthy eating and living. Part of a ‘True Health Coalition’ and a lifestyle medicine initiative known as GLiMMER™, founded by David Katz, MD, this council has been formed to demonstrate that there is overwhelming agreement among diverse experts worldwide about what’s needed to eradicate 80% of chronic disease and obesity. 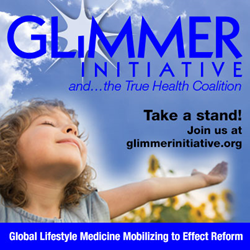 We know how to eliminate up to 80% of chronic disease in the world. Knowledge isn’t power unless it’s put to good use. GLiMMER is about turning what we truly know, into what we do—in order to add years to lives, and life to years, all around the world.

More than 120 of the world’s leading experts representing 16 countries have united to express their shared support for the same basic theme of healthful eating and living. Part of a 'True Health Coalition' and a lifestyle medicine initiative known as GLiMMER, this council has been formed to help demonstrate that, despite appearances to the contrary, there is in fact overwhelming agreement among diverse experts worldwide about the theme of healthful eating and living.

A basic goal of the initiative is to convey this consensus to the public and to replace the competing claims, changing views, and fad diets that now seem to prevail—with reliable, actionable understanding. Other objectives include global reforms in both medical education and practice related to lifestyle medicine; and support for efforts to foster health-promoting culture change, such as the Blue Zones Project®.

“The fundamentals of healthful eating are clear and time-honored,” said Dr. David Katz, president of the American College of Lifestyle Medicine and founding director of Yale University’s Prevention Research Center. “We have innumerable studies spanning decades, in populations all around the world, to show that the basic theme of eating well, in conjunction with exercise, and not smoking, is associated with a massive reduction in the lifetime risk of all chronic diseases: heart disease, cancer, stroke, diabetes, dementia, and so on. Simply by using the fundamentals on which we agree, and which we have know for decades, we could eliminate as much as 80% of the chronic disease and obesity we see in the world today.”

Katz, founder of the GLiMMER Initiative and the Council, has long been frustrated with the failure to use what we do know about lifestyle medicine, particularly diet, with our culture instead highlighting only disagreements. As author of three editions of a nutrition textbook for health professionals, and of a review paper entitled “Can We Say What Diet is Best for Health?” Katz has long felt the semblance of constant discord was obscuring a true consensus.

“David Katz is one of the medical profession’s great forward thinkers. This initiative promises to clarify the fundamentals of healthy living, and lend unique support to environmental, systematic approaches to a healthier America, and world,” emphasized Blue Zones Founder and CEO Dan Buettner in expressing his support for the initiative.

The GLiMMER Council would seem to validate Katz’ contention. Members include Former U.S. Surgeon General Richard Carmona, MD, noted researcher Christina Economos, PhD, former Commissioner of the U.S. Food and Drug Administration David Kessler, MD, the “Father of Lifestyle Medicine” Dean Ornish, MD, Harvard’s Department of Nutrition Chair Walter Willet, MD, Cleveland Clinic CEO Toby Cosgrove, MD, and famed author Deepak Chopra, MD, among many others. “Even more impressive,” Katz noted, “is that our membership already includes some leading proponents of vegan diets, and some leading proponents of Paleo diets—on the same council! This tells the world that even across a very wide range, health experts actually agree more than they disagree about the fundamentals of eating and living well.”

"GLiMMER is a timely and important initiative, with great potential to advance the goals of public health nutrition globally," said Dr. Walter Willett, a Council member and Chair of the Department of Nutrition at the Harvard T.H. Chan School of Public Health.

“We know how to eliminate up to 80% of chronic disease in the world, right now.” Katz said. “Knowledge isn’t power unless it’s put to good use. That’s what GLiMMER is all about: turning what we truly know, into what we do—in order to add years to lives, and life to years, all around the world. If not now, when? If not us, who?”

About the GLiMMER Initiative and True Health Coalition:
GLiMMER: Global Lifestyle Medicine Mobilizing to Effect Reform. An initiative designed to show the public-at-large that a massive, global consensus exists among experts about the 'fundamentals' of healthy living. The True Health Coalition will compellingly and creatively present the consensus about what know—devised as a globe-spanning, multidisciplinary who’s who in health promotion, disease prevention, and lifestyle medicine, centered on the fundamental, non-controversial, evidence-based principles of sustainable healthy living we have known at least since the 1993 publication of McGinnis and Foege’s seminal paper in JAMA. GLiMMER’s ultimate mission is to spark a rally cry that will unite us in reducing the prevailing burden of chronic disease by up to 80%—adding years to life and life to years. The principles supported by this unprecedented coalition of experts are available at http://glimmerinitiative.org.

About David L. Katz, MD, MPH, FACPM, FACP:
Dr. Katz is the founding director of Yale University’s Yale-Griffin Prevention Research Center; President of the American College of Lifestyle Medicine; Editor-in-Chief of the journal, Childhood Obesity; founding director of the Integrative Medicine Center at Griffin Hospital; and a Clinical Instructor at the Yale School of Medicine. He is on numerous editorial and scientific advisory boards, chairing several. Dr. Katz was among the original 150 thought leaders invited by LinkedIN to blog as an Influencer and, with a social media following topping 500,000, currently ranks in the top 40. Often a source for print journalists around the world, he has appeared on most major television news programs and talk shows in the U.S., and is a frequent guest on National Public Radio programs around the country. Dr. Katz holds 5 U.S. patents and has authored over 200 scientific papers and chapters, 15 books, and well over 1,000 columns and blogs.

Earning a BA degree from Dartmouth College, an MD from the Albert Einstein College of Medicine, an MPH from the Yale University School of Public Health, and an Honorary Doctorate from the University of Bridgeport, Dr. Katz is recognized globally for expertise in nutrition, weight management and the prevention of chronic disease. He has delivered addresses in numerous countries on four continents, and has been acclaimed by colleagues as the “poet laureate” of health promotion. For more information, visit http://davidkatzmd.com.