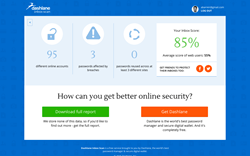 Dashlane Inbox Scan provides users with a tool to help secure their email accounts, which often function as “digital attics” full of the forgotten and exploitable information that hackers love.

Inboxes contain personal information that is a hacker’s gold mine. The plain-text passwords and login credentials that amass in email make it a frequent and easy target. Once they have these “keys” hackers can easily breach financial accounts or other sensitive data, as was the case in the recent Sony attack. The Heartbleed 1-year Anniversary Study released last week by Dashlane provides additional details on why email security is so critical.

Dashlane Inbox Scan provides users with a tool to help secure their email accounts, which often function as “digital attics” full of the forgotten and exploitable information that hackers love.

Inbox Scan was designed by Dashlane’s team of security experts to empower users to take control of their online security in seconds. Scan scours inboxes for vulnerable information and generates a personal report on inbox health.

"Our Heartbleed Study found that only 1% of Americans chose email as the item they most feared hackers would steal. Yet email is the favorite target for hackers because of the volume of personal information most people have in their accounts. You wouldn’t leave your Social Security card, bank card and ID’s on the kitchen table while going away on vacation, and you shouldn’t leave valuable data lying in your email, either.

Dashlane Inbox Scan provides the public with a tool they can use to quickly determine what sensitive information they have stored in email, and how vulnerable they are to an attack. The behavior of hackers isn't controllable, but you can make sure your first line of defense against attacks is strong by using Scan to secure your data."

Inbox Scan operates with the same strict privacy guidelines as Dashlane. The feature is only given temporary read-access during the scanning process and only the user can find vulnerable data in their security report.

Dashlane Inbox Scan works with every major email provider via browser, but not on mobile or desktop clients. It is free to use and does not require a sign up. To get Scan go to:

Dashlane makes identity and payments simple with its password manager and secure digital wallet app. Dashlane allows its users to securely manage passwords, credit cards, IDs, and other important information via advanced encryption and local storage. Dashlane has helped over 3 million users manage and secure their digital identity, and has enabled over $2.6 billion in e-commerce transactions. The app is available on PC, Mac, Android and iOS, and has won critical acclaim by top publications including The Wall Street Journal, The New York Times, and USA Today. Dashlane is free to use on one device and Dashlane Premium costs $39.99/year to sync between an unlimited number of devices. Dashlane was founded by Bernard Liautaud and co-founders Alexis Fogel, Guillaume Maron and Jean Guillou. The company has offices in New York City and Paris, and has received $30 million in funding from Rho Ventures, FirstMark Capital and Bessemer Venture Partners. Learn more at Dashlane.com.