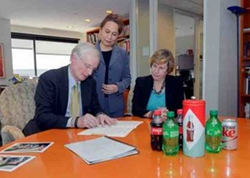 "The most effective way Coca-Cola can help end dangerous child labor is to pay sugar processors enough money to pay fair wages and to assure sugar cane harvesters the right to freely form labor unions and negotiate their wages and conditions." Ray Rogers

Corporate Campaign Inc./Campaign to Stop Killer Coke Director Ray Rogers issued a statement today in response to the announcement by the American Federation of Teachers(1) (AFT) that it was ending its boycott of all Coca-Cola products and had reached a deal with the company,(2) signed by AFT President Randi Weingarten and Coke's Director of Global Workplace Rights Ed Potter.

In October 2014, the AFT passed a resolution banning all Coca-Cola products(3) "based upon a “litany of” alleged “violations of workers' rights and child labor laws on the part of the company." (4)(5)(6)

The full statement from Campaign director Ray Rogers follows below:

Under the deal, as published on the AFT website(7) The Coca-Cola Company and the union will collaborate ‘to facilitate child labor due diligence studies,’… ‘facilitate the participation of AFT global affiliates... in local multi-stakeholder convenings, as needed’ and ‘collaborate on approaches to the remediation of child labor (when it is identified) and the advancement of school attendance,’ and will review progress made on their collaborative approach at least once a year. Meetings may be held in person or over the phone with a preplanned agenda.’

“We believe that this agreement to ‘facilitate’... ‘collaborate’...and...’review’ will do very little to end child labor in sugar cane harvesting or to hold Coca-Cola accountable for its practices that we charge have harmed and endangered children, communities and workers for decades. (8)(9)

“The growing awareness worldwide, as reported by CNN(10) (11) and others, of sugar suppliers who use child labor in dangerous sugar cane harvesting(12), and of Coke's alleged complicity in violence against union leaders in Colombia and Guatemala(13) (14) (15), as well as continued outsourcing by Coca-Cola bottlers of thousands of full-time jobs to non-union, poverty-wage jobs, spurred AFT members to pass the resolution calling for the ban of Coke products.

“CNN's Kyung Lah's May 2, 2012 exposé on hazardous child labor in Mindanao (Life Not So Sweet for Philippines' Sugar Cane Child Workers) portrayed Coca-Cola as one of the main customers of Filipino sugar factories. One 13-year-old boy, Alvic James, explained that he dropped out of school when he was in the first grade because ‘my family didn't have enough money to eat.’ Alvic says he wants to learn to read and write but because he is needed in the fields he has ‘no time to go to school.’

“It is because of thousands of children like Alvic and their families that we are issuing this statement. The most effective way for Coca-Cola to help end dangerous child labor in places like the Philippines, Mexico, Dominican Republic, Burma (18) and many other sugar producing countries, is not through more studies or what we see as meaningless rhetoric, but to: 1) pay the sugar processors enough money to pay fair wages to sugar cane harvesters, and 2) assure the rights of sugar harvesters to freely form labor unions to negotiate their wages and working conditions. Then children can be in schools and playgrounds, instead of laboring in plantation fields.

“The resolution banning Coca-Cola, which originated at its 2014 national convention and was made public last November, agreed that the AFT would ‘refrain from serving or selling Coca-Cola products at its offices...at any venue for its events, meetings, conferences and conventions; and recommend to all its affiliates that they not serve or sell Coca-Cola products at their offices and at venues for their events; and encourages them to participate in campaigns to remove Coca-Cola products from their schools, colleges, hospitals and other places in which they work...and call on Coca-Cola to cease circumventing its own code of conduct by hiring workers through subcontracting rather than hiring permanent employees...’ (19)

“The photo of Randi Weingarten with Coca-Cola board member Alexis Herman, President Clinton’s Former Secretary of Labor, and Coke's Director of Global Workplace Rights Ed Potter with a display of sugary, chemical-laden sodas, I believe, conveys an implicit endorsement of unhealthy beverages right on AFT's website, in contradiction to the union’s own school nutrition guidelines and ‘commitment to combat hunger, improve students’ diets, reduce childhood obesity and increase academic performance.’

"This apparent product placement during the signing of the agreement, simply mirrors studies by Yale University and other health professionals, that report Coca-Cola continues to aggressively market these sodas to children worldwide, helping fuel the childhood obesity, high blood pressure and diabetes epidemics. (20)

"Russell Mokhiber, editor of 'Corporate Crime Reporter,' interviewed prominent teachers and health advocates about their reactions to the AFT's lifting the ban on Coca-Cola products. AFT delegate, Sharon Silvio, said she was 'very disappointed' in the reversal of the boycott and wanted questions answered about how and why the reversal came about. Distinguished New York University Professor, Marion Nestle and author of upcoming 'Soda Politics: Taking on Big Soda (and Winning)' said Coca-Cola's partnership with AFT 'is an example of Coke's typical strategy: partner and buy the silence of the partners on issues of labor rights and health.’

“We share the view of Gary Ruskin, food policy expert and executive director of the nonprofit organization, U.S. Right to Know, who charges that Coca-Cola ‘preys on American children and is responsible in part for the epidemic of obesity and type 2 diabetes that afflicts our nation’s children. It is not the proper role of the American Federation of Teachers to partner with…. Coca-Cola.’(21) ”

Time magazine said, "Rogers has brought some of the most powerful corporations to their knees and his ideas are spreading." Boston Herald described Rogers as labor's most innovative strategist and "one of the most successful union organizers since the CIO sit-down strikes of the 1930s." Business Week described Rogers as a "legendary union activist." Financial Times called Rogers "The Coca-Cola Company's fiercest foe."

About Campaign to Stop Killer Coke:
The Campaign to Stop Killer Coke launched in 2003, is a worldwide movement with thousands of volunteers seeking to hold The Coca-Cola System, including the company and its bottlers, accountable for harmful practices that dangerously impact on the lives of workers, the environment and the health and well-being of children worldwide.