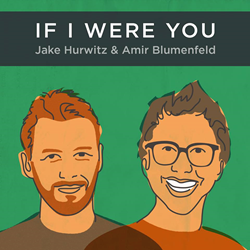 Spreaker's platform makes it easy for us to focus on doing what we do best, creating content, while they deal with the technology side by seamlessly getting our show onto as many devices as possible. Plus, it's fun to say Spreaker."

Spreaker, the leading podcast platform, announced today the addition of “If I Were You,” the hit show from the Los Angeles-based comedy duo, Amir Blumenfeld and Jake Hurwitz. Starring in one of CollegeHumor’s most popular and longest-running shows, the pair now will bring not only their podcast series, but also their hundreds of thousands of followers to Spreaker beginning today.

In every podcast episode, Blumenfeld and Hurwitz (and sometimes a guest) offer their guidance on a wide variety of topics from relationships, to work, to school, and everything in between. They also perform and record their show live on stage around the world in front of their fans.

Amir Blumenfeld and Jake Hurwitz have written and starred in hundreds of episodes of their web series, “Jake and Amir”, which have garnered nearly a billion views to date. Previously, they won a Webby Award for best comedy series, with Blumenfeld named best individual performer.

“Our mission at Spreaker is to help content creators make their shows accessible on as many platforms as possible,” said Francesco Baschieri, founder and CEO. “We’re proud to have Amir and Jake join the Spreaker platform and look forward to collaborating on this and many other hit shows looking for the largest audience and easiest creation and publishing tools.”

Amir Blumenfeld said, “For us, the transition to Spreaker was a no-brainer. Their platform makes it easy for us to focus on doing what we do best, creating content, while they deal with the technology side by seamlessly getting our show onto as many devices as possible. Plus, it’s fun to say Spreaker.”

Unlike other podcast platforms, Spreaker automatically and simultaneously distributes uploaded content like “If I Were You” to iTunes, YouTube, iHeartRadio, SoundCloud, Sonos and is compatible with a plethora of other listening destinations like Stitcher, Overcast, Downcast, TuneIn, Pocket Casts, BeyondPod and many other apps on iOS and Android that support podcasts.

Spreaker executives will be exhibiting, hosting streaming LIVE audio and speaking on “The State of Podcasting” panel, at the upcoming New Media Expo at NAB April 13-16, 2015 (Booth #N8016) in Las Vegas. To set up a meeting please email podcast(at)spreaker(dot)com. Spreaker is also offering a free month on any of hosting plans using the promo code: nmx15 here.

Spreaker is the leading on demand audio platform that makes it easy to create or discover podcasts and live audio content that can be simultaneously distributed across a vast array of social media sites. With over 25,000 podcasters hosting their shows on the platform and 4.8 million monthly active users, Spreaker is now the biggest podcast company in the marketplace, offering free and robust applications that empower people and top media brands alike to create and publish audio shows from any computer, tablet or mobile phone. Spreaker is a 5 year-old company with offices in San Francisco, Seattle and Berlin. For more information about Spreaker, please visit http://www.spreaker.com. Content creators can reach us at podcast(at)spreaker(dot)com.