Parents around the world can now enable safe Google, YouTube, Wikipedia, and custom policies for any device and any user on their home network, with a simple 5-minute setup and a dashboard summary of all user activity 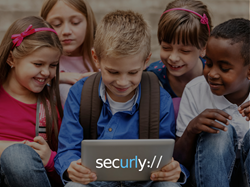 I can' tell you how much I greatly appreciate this service with teenage boys in the house. It really does a great job protecting them from all of the temptation out there. You also have great customer service! Thank you.

Securly, Inc. – the world's leading cloud-based provider of Internet Security for K-12 schools – today announced the general availability of its "Securly for Parents" product for the Home Internet Security market. This offering includes the following benefits:

Securly pioneered cloud-based Internet Security for K-12 schools back in 2013. A year later, it introduced the patent-pending Securly for Parents product to allow parents to co-manage home policies for their children's school-owned devices. With this release, Securly now extends the same technology to families for use in a typical home network environment.

Securly's product is the first cloud-based home internet security solution to help parents manage their kids' screen time on all devices throughout the home, with setup consisting of a simple 5-minute configuration on the home router. This offering includes the ability for parents to enable safe search and safe image search on Google, Bing, and Yahoo, and kid-friendly versions of sites like YouTube and Wikipedia. Parents will also be emailed a weekly summary of their children's activity.

Early users of Securly for Parents are excited about the new offering. Said Robert Duncan of Charleston, South Carolina, "I can't tell you how much I greatly appreciate this service with teenage boys in the house. It really does a great job protecting them from all of the temptation out there. You also have great customer service! Thank you."

In 2012, Securly was started out of a Silicon Valley garage with the vision of building an easy-to-deploy service that provided ubiquitous online safety to kids while keeping parents in the loop on how their kids’ devices were being used. Although version 1.0 of Securly's product was built for parents, the startup quickly realized how difficult it was to compete in the Home Internet Security market – going up against established names like McAfee – without a certain minimum threshold of brand trust.

As Securly thought about ways to gain adoption without having to compromise its vision, it did find one market that shared the goal of online child safety while remaining completely open to trying a product that none had heard of before. Said Securly co-founder Bharath Madhusudan, "K-12 schools in the US proved to be full of early adopters who were more than happy to try, and even buy, the only cloud-based player in town. With the help of our friends and well-wishers, we believe that we are well on our way to building a best-of-breed web filter for K-12 schools. In just two years, we have grown from zero to over a thousand schools."

With its K-12 school product now in a mature state, Securly is bringing the same technology to the home market to help parents understand how kids are using devices like Chromebooks and iPads. This move is in line with previous innovations from Securly. Two years ago, it developed the concept of “teacher whitelisting”, which gives classroom teachers the ability to approve a blocked website needed for instruction. Now, with patent-pending parental integration, Securly gives parents an increased sense of ownership in their child’s education by allowing them to co-manage home internet policies on school devices. This technology also delivers weekly reports that summarize how all devices - personal and school - are being used, along with high-urgency alerts for critical incidents like cyber-bullying and self-harm.

As a startup, Securly was helped by the fact that the two markets it serves – schools and parents – were not just highly synergistic, but also shared significant portions of the code base. This allowed its engineers to rapidly build features for its school customers and have those exact same features benefit parents in the same software release. In other words, Securly's renewed commitment to building a best-of-breed home product does not in any way cannibalize the trajectory of its K-12 offering.

The release of Securly for Parents is a huge step forward for the company on several fronts – it returns to its original vision of being able to keep parents in the loop on how their kids are utilizing their screen time. This time, however, it is backed by the brand trust that comes from serving hundreds of thousands of students around the globe. Said Securly for Parents team lead Awais Ahsan, "Imagine being able to see what websites your kids are spending the most amount of time on across all of your home devices and using that information to guide their online behavior. That is precisely what Securly for Parents will deliver to its users."

About Securly:
Securly is the world's leading provider of cloud based security for K-12 schools. The founding team has a combined 20+ years of experience in network security. The company is a venture backed startup in Silicon Valley and serves thousands of schools in North America, Europe and the Asia Pacific region.