WarQuest Brings Big Board Games Back 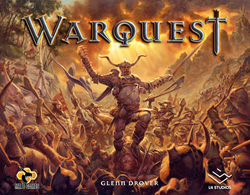 The cover of the WarQuest Board Game.

I think WarQuest does a great job of telling a story through the game and the art together with the gameplay combine to make an amazing gaming experience.

WarQuest, a new board game from seasoned game designer Glenn Drover, recently launched on crowdfunding site Kickstarter. With a fundraising goal of $85,000, the game represents the culmination of months of planning, design and execution.

WarQuest itself is a combination of a throwback big board strategy game, fused with modern gaming principles and design. The game involves grand strategy, conquest, and heroic quests in the fantasy world of Myrathia.

Players are invited to immerse themselves in a chaotic and mystical world while taking on the role of a warlord who seeks to reunite a fractured land under their banner. Players will recruit wood elves, dwarves, goblins, orcs and beast-men to fill the ranks of their armies and engage in epic battles. Those who are successful in conquering and controlling strategic cities and regions will make themselves ruler of all.

WarQuest is a "miniatures game," with the base game including 115 specially designed miniatures. If all stretch goals are reached, an additional 55 miniatures will be included. Supporters also have the option of adding another 115 miniatures worth of expansions - representing a total of 45 unique sculpts.

"WarQuest has truly been a labor of love," said Drover. "I wanted to make a game that brought back my childhood memories of the enthusiasm for not just the game but the story within the game world. I think WarQuest does a great job of telling a story through the game and the art together with the gameplay combine to make an amazing gaming experience. We are all very excited about how WarQuest has taken shape."

With Drover, L4 Studios and Mr. B Games involvement, WarQuest reunites, for the first time since 2006, the design, development and production team that brought board game lovers Railroad Tycoon, Railways of Europe, Conquest of the Empire, and Age of Empires III.

"L4 Studios is thrilled to be working with Glenn and the team from Mr. B Games," said L4 Studios Founder Keith Blume. "It's been an amazing ride and we're very excited to finally launch our product. We've put our hearts and souls into developing WarQuest and we think that passion will show through in every aspect of the game."

WarQuest's 30-day campaign will finish on May 7th, 2015. For more information and to secure a copy of this unique game, visit the Kickstarter page at (https://www.kickstarter.com/projects/1794227864/warquest-by-glenn-drover/).