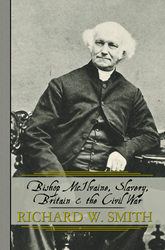 As the Bishop of Ohio, McIlvaine worked closely with President Lincoln to gain Union support in Great Britain.

(PRWEB) April 15, 2015 -- In a time when all men were not viewed as created equally, several important historical figures such as Abraham Lincoln and Frederick Douglass spoke out against the use and mistreatment of slaves. However, the untold story of one man’s mission to leverage support abroad, motivate the military and government and lead the country to equality have remained a mystery.

As the Bishop of Ohio, McIlvaine worked closely with President Lincoln to gain Union support in Great Britain. McIlvaine gained multiple honorary degrees and upon his death was honored in Great Britain and America.

“After encountering numerous scholarly works mentioning McIlvaine, I decided to look further into his life,” Smith said. “McIlvaine’s stature in Great Britain facilitated his endeavors to gain British support for the Union cause. A detailed analysis of his labors and failure in mid-Victorian society has not been available.”