New book reveals how African Slavery Was Never About Color 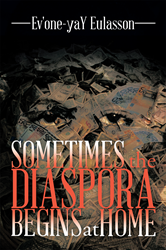 Just because people live on the same land-mass and are members of the same or related ethnic, religious, familial aggregates doesn’t mean that they all have an affinity for each other.

According to Mic.com, about 60,000 slaves live in the U.S. today. The Civil War didn’t end slavery. It only concealed it.

In his book “Sometimes the Diaspora Begins at Home,” Ev’one-yaY Eulasson, also known as Felton Perry, explores the 400 years of European Trans-Atlantic Slave Trade (TAST) from the African perspective. It was more than a race issue.

While attending the University of California Santa Barbara in 2002, Eulasson had a very personal experience with racial profiling when a policeman stopped him for questioning. He claimed that Eulasson looked like someone the police were looking for.

After his run-in with the police, Eulasson became bitter and angry. Then, when he overheard a student say, “Black people sold their own kind,” he chose to investigate the assertion.

“Just because people live on the same land-mass and are members of the same or related ethnic, religious, familial aggregates doesn’t mean that they all have an affinity for each other,” Eulasson said.

Much like TAST, kidnappers today act horrifically, not because of the color of another persons skin, but for money and power. Eulasson hopes to start a conversation of these issues today by providing the historical outcome almost four centuries ago.

About the Author:
Despite dropping out of high school, Felton Perry, penned Ev’one-yaY Eulasson, attended Roosevelt University where he received his B.A. in 1964. Upon graduation, he pursued acting in Los Angeles, playing roles in films such as “RoboCop,” “Magnum Force” and “Dumb and Dumber.” After a racial profiling experience at the University of California Santa Barbara where he was studying for his M.A., he enrolled in UCLA for African Studies. Perry volunteered regularly, teaching acting to at-risk youth and later teaching reading and basic math for the LA Unified School District-Adult Division. He loves to read and is passionate about history especially as it relates to current world trends.