The BNSF Railway has approved a new dust control solution from Midwest Industrial Supply, Inc. for the second time in their effort to dramatically reduce in-transit coal dust. 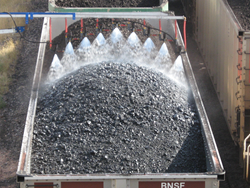 The Powder River Basin — located on the border of Wyoming and Montana — is the largest coal producing region in the United States and accounts for 44% of US coal production and 40% of US electricity generation. The basin currently contains over 15 mines and their output has steadily increased over the last 20 years from a total of 92 million short tons in 2006 to 382 million tons in 2014. The Basin is serviced by the BNSF railroad, which has transported the majority of the coal produced in the region, and has increased service to the area to match the increased production of the mines.

Midwest Industrial Supply, Inc.’s, Soil-Sement® CCT-Cm has officially been approved for use in the Powder River Basin meeting the requirements of the BNSF tariff. Midwest developed Soil-Sement CCT-Cm to meet the demands of BNSF customers. This solution lowers the amount of product applied per railcar, reduces the need for water, and minimizes the cost-per-ton to bind the coal’s surface to prevent coal loss during transit — a trifecta that no other competitor could match. At an application rate of .65 gallons per railcar and using only 11 gallons of water, Soil-Sement CCT-Cm reduces coal dust emissions by an impressive 85%. Midwest’s Soil-Sement CCT has been in use at mines in the Powder River Basin since the first “Super Trial” in 2008, and is delivered and managed by Midwest’s joint venture partner, MCRL, which has applied Soil-Sement CCT to 55% of the total treatable coal shipped out of the basin.

In line with their solutions-oriented approach to the challenges faced by heavy industry, Midwest developed Soil-Sement CCT-Cm to meet the exact needs of BNSF and their mine customers in the Powder River Basin. With their state-of-the-art R&D capabilities—including a wind tunnel to fully recreate transit conditions—Midwest works side-by-side with clients to hone the product application to meet the specific requirements of each project.

Out of only three products approved at the time of the 2008 Super Trial, there’s a reason why Midwest’s Soil-Sement CCT came out on top. Midwest is at the forefront of the coal-car topping business, with the most affordable, cost-effective, and seamless emission-controlling technologies available. Not only are Midwest’s products of the highest quality, but Midwest’s specialized service—not just in the United States, but worldwide—makes sure that each and every client’s project is approached holistically, with an understanding of the unique requirements of the project and the specifics of the problem faced. Great outcomes like these require the great expertise and attention to detail that Midwest has developed over 40 years in the industry.

Want to learn more about Midwest? Visit our booth, #739 at the Electric Power Show, April 21-23, or visit our website.