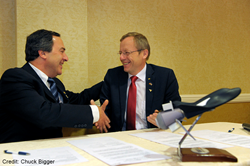 “We highly value our partnership with the German Aerospace Center,” said Sirangelo. “This relationship is a great example of the best-in-industry and government agency partnerships, both domestic and international, that we have sought.”

“We highly value our partnership with the German Aerospace Center,” said Mark N. Sirangelo, corporate vice president, SNC’s Space Systems. “This relationship is a great example of the best-in-industry and government agency partnerships, both domestic and international, that we have sought. Our Dream Team will continue the advancement of the Dream Chaser, which is a true global program. We look forward to the next phase of our cooperation with DLR as we enter this new agreement.”

The cooperation, which was entered into today, builds upon the successful one-year Dream Chaser technical agreement signed in 2013. The new agreement, which extends through 2017, will continue the valuable developmental work completed while identifying new and advanced technologies to pursue in order to further advance the crewed and uncrewed Dream Chaser spacecraft as a flexible low-Earth orbit (LEO) space transportation system for a variety of missions and customers. One of the cooperative activities completed this year was the Dream Chaser for European Utilization (DC4EU) study performed by SNC, OHB Systems AG (OHB) and DLR.

“We are pleased to continue to work together with SNC as part of their Dream Chaser team,” said Prof. Jan Woerner, chairman of the executive board of DLR. “We recognize the significant value of the Dream Chaser, especially for LEO and we look forward to working together for new applications. The versatility of the Dream Chaser – crewed or uncrewed - allows for multiple applications such as transportation of cargo and humans as well as direct use for activities such as removing space debris.“

SNC’s Dream Chaser is a multi-mission-capable space utility vehicle that is able to flexibly operate as an independent science platform, logistics enabler or orbital servicing vehicle with the ability to deploy, retrieve, repair, replace, refuel or assemble items in space. Dream Chaser provides the only reusable, lifting-body spacecraft with a commercial runway landing capability, anywhere in the world - offering safe, affordable, flexible and reliable transportation to space.

About Sierra Nevada Corporation
Sierra Nevada Corporation (SNC), headquartered in Sparks, Nevada, is among the “World’s Top 10 Most Innovative Companies in Space.” Over the last 30 years, under the leadership of President Eren Ozmen and CEO Fatih Ozmen, SNC has become one of America’s fastest-growing private companies and the Top Woman-Owned Federal Contractor in the United States. With a workforce of over 3,000 personnel in 31 locations in 17 states and three locations in Europe, SNC has a reputation for rapid, innovative, and agile technology solutions in electronics, aerospace, avionics, space, propulsion, micro-satellite, aircraft, communications systems and solar energy.

SNC has six unique business areas that are dedicated to providing leading-edge solutions to its dynamic customer base. SNC has a proven track record of success spanning more than five decades. It is focused on providing its customers with the very best in diversified technologies and continues to focus its growth on the commercial sector through internal advancements in dual-use applications and outside acquisitions including the emerging markets of telemedicine, Cyber and net-centric operations.

About the German Aerospace Center
DLR is the national aeronautics and space research centre of the Federal Republic of Germany. Its extensive research and development work in aeronautics, space, energy, transport and security is integrated into national and international cooperative ventures. In addition to its own research, as Germany’s space agency, DLR has been given responsibility by the federal government for the planning and implementation of the German space programme. DLR is also the umbrella organisation for the nation’s largest project management agency. DLR has approximately 8000 employees at 16 locations in Germany and offices in Brussels, Paris, Tokyo and Washington D.C.