In conjunction with The Anne Frank House in Amsterdam, join us for the North American premiere of "The Helpers of the Secret Annex," a newly designed exhibit on those who helped hide Anne Frank and others. On display from May 6 - December 30, 2015 in New York City gallery. 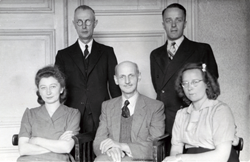 "Never have we heard one word of the burden which we certainly must be to them, never has one of them complained of all the trouble we give...They put on the brightest possible faces, bring flowers and presents for birthdays and bank holidays, are always ready to help and do all they can."

It was in many ways the nature of the job. Those who aided Jews and other targets of the Nazis during World War II often went unseen and unrecognized. The reason was simple. Helping these victims could have easily cost them their lives.

In honor of these hidden heroes – on the 70th anniversary of the end of World War II in Europe – The Anne Frank Center USA is proud to host the North American premiere of "The Helpers of the Secret Annex," a newly designed exhibition focusing on the brave individuals who provided food, clothes, medicine, and entertainment to Anne Frank and the seven other people hiding in the Secret Annex.

Anne wrote frequently about the helpers in her diary, noting, "[This is] something we must never forget; although others may show heroism in the war or against the Germans, our helpers display heroism in their cheerfulness and affection."

Originally envisioned by The Anne Frank House, the exhibit has been redesigned for the gallery by Hixon Design Consultants. Rob de Vos, The Consul General of the Kingdom of the Netherlands in New York, will open the exhibit on May 6.

The Anne Frank Center USA, a partner of the Anne Frank House, uses the diary and spirit of Anne Frank as unique tools to advance her legacy, to educate young people and communities in North America about the dangers of intolerance, antisemitism, racism and discrimination, and to inspire the next generation to build a world based on equal rights and mutual respect.