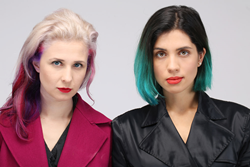 Founding members of the Moscow-based activist collective Pussy Riot will be co-hosted by Santa Fe University of Art and Design and SITE Santa Fe during a conversation and Q&A on May 7.

The program will feature topics such as cultural freedom, feminism, freedom of expression, world politics, and arts and activism, and be followed by a Q&A with the audience. The conversation is held as part of SFUAD’s Artists for Positive Social Change™ series, and also kicks off SITE Santa Fe’s 20th anniversary programming. Launched in 2011, Artists for Positive Social Change is a university-wide series of events, courses, lectures and performances exploring a specific theme relevant to society and the work of artists who push the creative boundaries of their profession.

Tickets for the program, the proceeds of which will benefit SITE Santa Fe’s future programming, may be purchased at SITE Santa Fe and range from $35 to $600. SFUAD students can attend the event for free on a first-come, first-serve basis, but individuals must pick up tickets on campus in advance.

About Pussy Riot
Pussy Riot is a feminist protest art collective, which has been one of the world’s most prominent activist groups in recent years, aiming to focus attention on creative freedom and human rights violations around the world. Founded in August 2011, the group became known for staging guerrilla performances in iconic public locations in Moscow. Footage from these performances were edited into music videos and posted on the Internet. The collective's lyrical themes and values include feminism and gender equality, LGBT and human rights, and democracy and freedom of expression.

About Nadya and Masha
Nadezhda (Nadya) Tolokonnikova and Maria (Masha) Alekhina are Russian conceptual artists and political activists. They are founding members of the art collective Pussy Riot. In August 2012, they were sentenced to two years' imprisonment following an anti-Putin performance in Moscow Cathedral of Christ the Saviour. Shortly after their release in December 2013, they announced the opening of Mordovia office of Zona Prava, their prisoners’ rights NGO, and in September 2014 started their independent own independent news service, MediaZona, which has since partnered with The Guardian. They have spoken before the US Congress, British Parliament, and have appeared on stage with world leaders including Bill Clinton. In November 2014 they met with Julian Assange in London and became board members of his Courage Foundation. Tolokonnikova and Alekhina are Lennon Ono Grant for Peace recipients, and most recently, appeared as themselves with President Frank Underwood on season 3 of House of Cards.

About SITE Santa Fe
SITE Santa Fe opened in 1995 to present what was then the only international biennial of contemporary art in the United States, and one of only a handful of biennials around the world. From the very beginning, SITE established a commitment to a risk-taking and visionary perspective that continues to drive its programs today. Year-round exhibitions and educational programs encourage the creative and intellectual potential of the audience and uphold the region’s tradition of fostering avant-garde art. As an institution with a year-round contemporary art program, SITE hosts an Art & Culture series of lectures and performances, as well as an extensive education and outreach program for local schools, all of which attract over 20,000 local, national and international visitors annually. Since its launch, SITE has presented over 75 exhibitions —including nine biennials —of works by over 500 international artists.