The Microcredit Summit Campaign joins the World Bank Group and their coalition of partners -- including MasterCard, Visa, Mandiri, the State Bank of India, Equity Bank, and Bandhan -- in making a commitment to accelerate universal financial access; financial access and inclusion are stepping stones to achieving the end of extreme poverty by 2030. The Campaign will work with its reporting institutions to help them expand their outreach by at least 53 million of the world's poorest families, bringing the overall total of the world's poorest families reached by microfinance to 175 million by 2020. 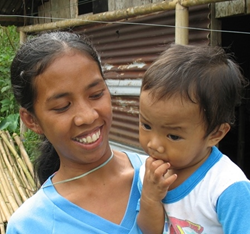 Microfinance can help families like this mother and her child to access financial services and, ultimately, help end poverty

The Microcredit Summit Campaign has made a commitment to support the World Bank Group's goal to reach universal financial access by 2020 (UFA2020), joining a global coalition of partners that include multilateral agencies, banks, credit unions, card networks, microfinance institutions and telecommunications companies.

"The hardest part of reaching UFA2020 will be to ensure that financial services reach those living in extreme poverty," said Larry Reed, director of the Microcredit Summit Campaign. "The Microcredit Summit Campaign will work with its reporting institutions to help them expand their outreach by at least 53 million of the world's poorest families, bringing the overall total of the world's poorest families reached by microfinance to 175 million by 2020."

At the World Bank's 2015 Spring Meetings, where the commitments were announced, UN Secretary General Ban Ki-moon remarked that financial inclusion (and universal financial access) is a "lynchpin" for achieving the post-2015 development agenda. To get there, he said, development actors must create stronger partnerships.

Microfinance institutions and other organizations that target financial services to the extreme poor are critical strategic partners for governments and international financial institutions that are working to achieve universal financial access. According to the Campaign's annual survey of microfinance outreach, the sector has proven effective at reaching the poorest, with 115 million families living in extreme poverty having access to financial services as of December 31, 2012.

The Microcredit Summit Campaign helps to discover, highlight, and promote ways to use financial tools, in combination with other development services, to foster movement out of poverty. It works with microfinance actors, their partners, and government policy makers to promote the adoption of client-focused development of financial tools and creative ideas for delivering these services to remote and hard-to-reach areas at affordable prices. The Campaign will document what is being done well and disseminate those lessons far and wide through the State of the Campaign Report and its Microcredit Summits.

The Campaign is calling for scaling up financial inclusion efforts targeted at the extreme poverty along six "pathways":

Other organizations that announced commitments at the Spring Meetings are MasterCard, Visa, Mandiri, the State Bank of India, the World Council of Credit Unions, WSBI, the Microfinance CEO Working Group (a group of 10 international microfinance networks), Telenor, Ooredoo, Equity Bank, and Bandhan.

The Microcredit Summit Campaign (the "Campaign"), a project of RESULTS Educational Fund, is the largest global network of institutions and individuals involved in microfinance and is committed to two important goals: 1) reaching 175 million of the world's poorest families with microfinance and 2) helping 100 million families lift themselves out of extreme poverty. The Campaign convenes a broad array of actors involved with microfinance to promote best practices in the field, to stimulate the exchange of knowledge and to work towards alleviating world poverty through microfinance.