Salesian Missions is urging the public to donate to its Nepal Emergency Fund, which will go directly to support missionaries currently working on the ground helping those affected by the devastation and aftermath of the earthquake. 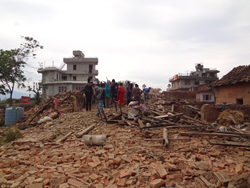 Photos from Salesian missionaries, taken shortly after the earthquake in Nepal.

Salesian missionaries are responding providing aid and emergency relief but supplies are limited. The emergency appeal will help missionaries on the ground provide aid directly to those who need it most.

Salesian Missions, the U.S. development arm of the Salesians of Don Bosco, has launched an emergency fund to assist Salesian missionaries in Nepal who are working to provide aid and emergency relief to those affected by Saturday’s 7.8 magnitude earthquake that has devastated Kathmandu and surrounding villages. To raise money for the fund, the Catholic nonprofit aid organization has launched an emergency fundraising campaign and is issuing an urgent appeal for donations.

The devastating earthquake has killed more than 4,000 and the death toll is expected to rise when rescue workers are finally able to reach vulnerable mountain villages that have not been assessed yet, according to the Associated Press. The quake has injured more than 7,180 people and left tens of thousands homeless. Close to 70 percent of homes in villages around Kathmandu were destroyed and people are sleeping outside exposed to the cold and rain. Roads are impassible in places blocked by debris and landslides caused by the earthquake. In some remote villages, it is a few days walk to reach people to assess damage and bring relief to those affected. People are in need of food, shelter and medicine across Kathmandu and surrounding villages.

In addition, the healthcare system has been stressed by the high demand of people in need of medical care. According to an Associated Press report, Lila Mani Poudyal, the government's chief secretary and the rescue coordinator, issued an urgent call for orthopedic doctors, nerve specialists, anesthetists, surgeons and paramedics to come to Nepal and assist.

Salesian priests, brothers and sisters (who are living and working in Kathmandu and surrounding villages) immediately responded to those in need. Risking their own safety, Salesian missionaries assessed the damage and began bringing residents food aid and tarps to provide shelter to those who had lost their homes. Close to 1,000 people were provided aid the evening of the earthquake, and the work continues.

“Salesian missionaries have been providing education and social development services in Nepal since the 1990s, and because Salesians are part of the community, they are well positioned to provide immediate aid after disasters like this earthquake,” says Father Mark Hyde, executive director of Salesian Missions. “Reports from missionaries on the ground in Nepal have indicated that people have lost everything. Many are living in tents exposed to the cold and rainy weather. Others, who were fortunate to not lose their homes, are afraid to return fear of continued aftershocks.”

In addition, Salesian Sisters in Kathmandu have been forced to evacuate because their building was partially destroyed and walls collapsed during the earthquake. Along with many other residents of the city, the Sisters are living in tents, doing their best to help people who have been affected.

“Salesian missionaries are responding providing aid and emergency relief but supplies are limited. The emergency appeal will help missionaries on the ground provide aid directly to those who need it most,” adds. Fr. Hyde.

Salesian Missions is urging the public to donate to its Nepal Emergency Fund, which will go directly to support missionaries currently working on the ground helping those affected by the devastation and aftermath of the earthquake. Go to http://www.SalesianMissions.org/Nepal for more information and to give to the relief efforts.

Salesian Missions is headquartered in New Rochelle, NY, and is part of the Don Bosco Network—a worldwide federation of Salesian NGOs. The mission of the U.S.-based nonprofit Catholic organization is to raise funds for international programs that serve youth and families in some of the poorest places on the planet. The nearly 30,000 Salesian missionaries are made up of priests, brothers and sisters—all dedicated to caring for poor children around the globe in more than 130 countries by helping young people become self-sufficient through trade skills and other opportunities. The Salesians are widely considered the world’s largest private provider of vocational and technical training. Additionally, more than 1 million children attend Salesian primary schools, many of which are UNICEF-supported. Millions of vulnerable youth have received services specifically funded by Salesian Missions. These services and programs are provided to children regardless of race or religion. Funds are also raised to assist with humanitarian emergencies created by events such as natural disasters, wars and violence. Salesian Missions is the trusted partner of many nonprofit organizations for the delivery of aid and the implementation of programs including many funded by USAID and the U.S. Department of State’s Bureau of Population, Refugees, and Migration. More information at http://www.SalesianMissions.org.

Photo taken by Salesian missionaries in Nepal shortly after the earthquake. (Photo courtesy of Salesian Missions.)

Salesian missionaries are caring for people in Nepal, after a devastating earthquake destroyed and damaged homes. Survirors are living outdoors in makeshift tents because buildings are not safe.