The Nepal earthquake has injured thousands of people. Handicap International’s 50-person team in Nepal, now supported by additional experts arriving from abroad, are expanding their initial response to begin case-managing the injured. 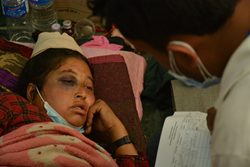 ...each individual needs to be case-managed as quickly as possible...

The number of people injured by Saturday’s 7.8 magnitude earthquake and subsequent aftershocks in Nepal continues to rise. Authorities have tallied 6,500 injuries, a figure that could increase to 50,000 as a clearer picture emerges from the hard-hit, remote areas located close to the earthquake’s epicenter.

Earthquake injuries can include severe fractures and crushed limbs. If not properly cared for, these injuries can lead to further complications, like gangrene or poor bone alignment. The injured need immediate treatment and rehabilitation care, such as physical therapy, to prevent the injuries from worsening, and to reduce the risk of developing subsequent, long-term disabilities.

As a result of years of planning and preparation for such an event in Nepal, Handicap International was able to quickly provide support to hospitals. An emergency team arrived Tuesday to bolster the local office’s 50 existing staff. A second team will depart for Nepal tonight. The organization is also sending equipment to the region, including orthotic braces, rehabilitation kits, and tents. Teams will travel to areas close to the epicenter of the earthquake, which have few health centers. There, they will deploy mobile teams to identify the most vulnerable people in need of care.

Staff began distributing equipment to two hospitals in Kathmandu on Saturday, and are providing emergency rehabilitation care to the injured. The teams will identify and register the injured, taking note of their contact details and types of injuries, and will refer them to existing rehabilitation centers. These teams will also identify all additional services available for individuals. In addition to emergency relief, patients need continual follow-up.

“When a lot of people have been injured in an earthquake, each individual needs to be case-managed as quickly as possible, and provided with follow-up care once they leave the hospital,” says Hélène Robin, the head of Handicap International’s emergency response for Nepal. “Our experience in natural disasters, particularly in Haiti after the earthquake in 2010, has taught us that it’s important to stay in touch with the injured after they return home, and to continue providing them with care so that they don’t develop permanent disabilities.”

In the days ahead, Handicap International will also provide psychosocial support to people traumatized by the disaster, clear roads to supply relief to victims, and set up a logistics base to transport humanitarian aid.

Hundreds of American donors have turned to Handicap International since Saturday’s disaster. Indeed, Jeff Meer, Executive Director of Handicap International U.S., says that the emergency has prompted the U.S. office’s largest-ever online fundraising response. “Americans are ensuring that our teams can respond to the most pressing cases, wherever they happen to be,” he says. “We’re grateful. Their generosity, beginning on Saturday and continuing this week, has delivered hope to the people recovering in Nepal, and indeed to our hard-working field staff. They help us to ensure that no one is excluded from this response, especially people with disabilities.”

Handicap International has launched a fundraising appeal in aid of the victims of the earthquake in Nepal. Readers can contribute to relief efforts by making a credit card donation http://bit.ly/HINepal or a gift via PayPal http://bit.ly/1E6Br8r