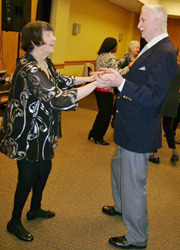 Older people really wanted a social activity and without question, the South Orange Senior Prom filled that need. It was spectacular and everyone walked out with a smile on their face.

Seton Hall University was the site for the first South Orange Senior Prom, hosted by the advocacy group South Orange Seniors (SOS) and the university’s Division of Volunteer Services (DOVE) on April 12. Approximately 40 residents from Village Apartments of the Jewish Federation and South Orange B’nai B’rith Federation House in South Orange, N.J. attended the successful event; both senior residences are owned and managed by the Jewish Community Housing Corporation of Metropolitan New Jersey(JCHC). South Orange B’nai B’rith Federation House residents Nan Samens, Peg Cinberg and Tonia Moore were among the coordinators who worked with the DOVE office to make it happen. They are also active members of the South Orange Senior Citizen Advisory Committee to the Township’s Board of Trustees, along with Harold Colton-Max, CEO of the JCHC.

There were refreshments, dancing and musical entertainment by singer Peri Smilow and husband Budd Mishkin, a NY1 television personality; the couple performed classic rock songs, followed by more music and dancing courtesy of a DJ who played tunes specially selected by Mark Pressel, a former Broadway musical director and resident of Village Apartments of the Jewish Federation. Admission was free with the donation of a can of non-perishable food for the Our Lady of Sorrows food bank, which is supported by Seton Hall University.

“We found that older people really wanted a social activity and without question, the South Orange Senior Prom filled a need in the community,” said co-coordinator, Nan Samens. “It was spectacular and everyone walked out with a smile on their face. People already want to sign up for next year.”

The Senior Prom provided an opportunity for older adults to socialize with their peers as well as foster a stronger connection with Seton Hall University. SOS coordinators worked with Michelle Peterson from DOVE to arrange the dance. This winter, student volunteers from DOVE shoveled out residents’ cars at the two South Orange senior residences. Seton Hall offers senior discounts on its regular courses and also offers classes specifically for area seniors.

“We are thrilled to be working with the dynamic leaders of the South Orange Seniors, who are filled with energy and vision,” said Michelle Peterson, director of Seton Hall’s Division of Volunteer Efforts. “DOVE aims to serve our community through love and outreach. Our collaboration with SOS has been a wonderful experience for the seniors and Seton Hall students alike.”

Samens agreed. Of the 25 or so college students who participated, she noted that, “The kids who volunteered helped make the day; there was a wonderful inter-generational feeling of warmth and camaraderie that they generated. It was just incredible.” She added that SOS hopes to continue holding inter-generational programs, either with Seton Hall or with Columbia High School in South Orange.

South Orange Seniors was created last May to address concerns and needs of older adults in South Orange.