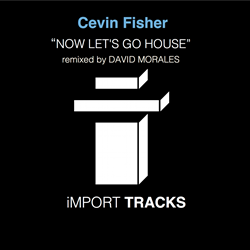 The deep-house sound has been experiencing a revitalization and it’s worth noting that forefathers like Cevin Fisher have never strayed far from the sound they helped create.

A pioneer in house music, Cevin Fisher has been producing music for well over two decades. His single, “Now Let’s Go House” (Import Tracks) is out now and includes a remix by house music legend, GRAMMY® Award winner, David Morales.

The Radio Edit cuts to the meat of the track with Fisher’s insistent vocal entering towards the top of the track keeping the energy constant through to the well-constructed finish. This version is tight and it propels the listener forward with an undulating, sonic thrust that could be as at-home on a darkened nightclub dancefloor as it is on a hot, outdoor festival field.

The David Morales Mix is the piece-de-resistance with its own distinctly tropical, gently tribal percussion and vaguely ominous-sounding synth progression. Morales takes Fisher’s vocal, so easily recognizable for the timbre of his voice, and drops it like midnight-blue ink into a well of crystalline water. The effect is one of an all-encompassing, life-affirming, deep-house track as noteworthy for its strings as it is for its message.

The sub-genre of electronic dance music known as “deep-house” has been experiencing a revitalization and it’s worth noting that forefathers like Cevin Fisher (pronounced “sevin fisher”) have never strayed too far from the sound they helped create. Cevin Fisher has enjoyed success in his collaborations with Layo & Bushwacka!, Christian Smith, D. Ramirez, Danny Rampling, Steve Mac, David Morales and Fisher’s partner in the Import Tracks imprint, Cliff Saint-Cyr, among others. At a time when electronic dance music (EDM) is widely considered the leading genre of popular music and EDM festivals the dominant cultural phenomenon amongst today’s youth, it may at times be easy for the majority of music-lovers to forget the achievements of producers like Cevin Fisher who helped make today’s EDM scene possible in America.