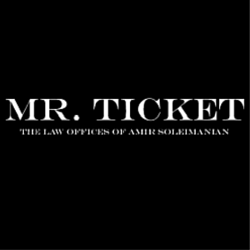 The lawyers at Mr. Ticket will be able to get clients their license back within a more reasonable amount of time if they missed their first court date.

According to the New York Times (4/8/15), a new report reveals that California drivers who don't have the means to pay fines for minor traffic infractions often have their licenses suspended; the policy has a harsh impact on middle- and lower-class people, widening the gaps of economic disparity.

Amir Soleimanian, Owner and Founder of traffic attorney's office Mr. Ticket, says the new rules suspend the license of anyone who fails to appear in court for a traffic ticket. Before these rules passed, one could simply pay a $10 fee to get his or her license back.

"The old procedure where one would miss a court date and simply pay $10 to get their license back was called Abstract. These missed court dates would unnecessarily prolong the legal process; in many cases, it would take six to 12 months to settle a simple traffic violation," Soleimanian says. "Those who receive traffic tickets can no longer miss their court date, appear in court the next day, pay a $10 fee and have their license reinstated and a new court date set."

While the new rules encourage drivers to be more responsible and show up to their scheduled court date on time, they might also make it more difficult for drivers with lower incomes to make ends meet, the New York Times reports.

“These suspensions make it harder for people to get and keep jobs, further impeding their ability to pay their debt,” the report, published by the Lawyers’ Committee for Civil Rights of the San Francisco Bay Area, said. “Ultimately, they keep people in long cycles of poverty that are difficult, if not impossible, to overcome.”

As recently as 2013, four million California drivers -- 17% of adults with driver's licenses in the state -- had their licenses suspended. In the event that one's license is suspended, Soleimanian advises drivers to seek out legal help with a qualified traffic attorney.

"As always, it is best to contact a lawyer right after getting a traffic ticket," Soleimanian says. "The lawyers at Mr. Ticket will be able to get clients their license back within a more reasonable amount of time if they missed their first court date."

Mr. Ticket is a law firm that focuses on handling traffic law cases, including reckless driving, DUI, hit and run, and more. The Mr. Ticket law firm knows that the repercussions for any of these cases can be costly and long-lasting. To learn more, visit 4mrticket.com