Nonprofit Sun Health has been in major "renovate and build" mode since 2013 as it upgrades its three senior living Life Care communities to keep current residents satisfied and attract new move-ins. Between $75 and $100 million has gone into the efforts. 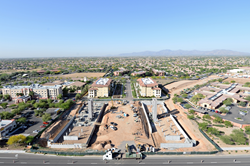 The two new villas under construction on The Colonnade campus in Surprise, Ariz.

All of these projects reflect our commitment to helping our residents lead healthy, full lives.

Construction crews have become a common sight on Sun Health Senior Living’s three Life Care campuses. That’s because nonprofit Sun Health has invested between $75 and $100 million since 2013 in renovating or expanding Grandview Terrace, La Loma Village and The Colonnade.

Sun Health Senior Living, part of Sun Health, is the largest locally-owned and operated nonprofit provider of destination retirement communities in Arizona. Its three Life Care communities are home to more than 700 residents. Projects for each campus are summarized below.

Completed and current projects at Grandview Terrace Health and Rehabilitation include:

Grandview Terrace – independent living
Sun Health officials and architects from Todd & Associates are drawing up plans to address immediate and long-term needs at Grandview Terrace, an independent living community with more than 300 residents. This project’s funding and overall scope is still subject to Sun Health board approval and construction planning. Improvements being considered include redesigning the main entrance and renovating common areas.

The Colonnade – Surprise
Sun Health has invested approximately $50 million over the past five years at The Colonnade, an independent living community of 180 residents. Part of the $50 investment includes a $25 million commitment to build two 36-unit villas, a new recreation and dining center specifically for residents and a 24-bed assisted living residence. Work on the two new villas, adjacent to two existing villas, began in January 2015 and is expected to finish in early 2016. Crews expect to break ground on the new recreation and dining center in fall 2015 and to begin developing the site for the 24-bed assisted living residence in late 2015.

Additional projects (not included in $25 million) include a porte-cochere at the main entrance to The Colonnade and an expanded outdoor patio area. Longer-range plans include adding 24 beds to the assisted living residence and building a 24-bed memory support residence.

La Loma Village – Litchfield Park
Sun Health and Swaback Partners, headed by Vern Swaback, former apprentice of Frank Lloyd Wright, are working on an updated master plan for 300 acres on the La Loma campus. Concepts include the culture of a village and multiple-use structures as well as elements of agri-tourism, a farm-to-fork model and expansion of existing independent living and assisted living spaces. Sun Health is collaborating with the City of Litchfield Park on the project. The city owns the nearby 22-acre hilltop residence, former home of the Denny family who donated 353 acres of the estate in 1998 to Sun Health. La Loma Village stands on the southern corner of the grounds.