In its first year of existence, the Robert Morris University Illinois eSports team made it to the North American Collegiate Championship tournament held in California this past weekend. 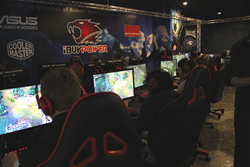 I'm really proud of our players and our coaching staff for what we accomplished this year. Second in North America for a first year program is amazing. --Kurt Melcher

The Robert Morris University Illinois eSports (competitive video gaming) League of Legends Team finished second in the 2015 North American Collegiate Championships in California this weekend. RMUI is the first university in the world to add an online sport to its athletic program and to offer a varsity scholarship program to eSports players. It is the first university to build an on-campus facility to facilitate gaming on both an educational and professional level.

Robert Morris University Illinois established its eSports program at its main campus in Chicago in September. The university has ten campuses in Illinois, but is not affiliated with Robert Morris University in Moon Township, PA. The RMU Eagles compete in League of Legends, one of the largest and most popular eSport games. Although eSports have long been a part of the culture of gaming, competitions have seen a large surge in popularity in recent years. Esports it the latest addition to RMU’s already rich athletic program which includes 55 teams in a variety of sports.

Associate Athletic Director Kurt Melcher, who also directs the eSports program, accompanied the players to the tournament. “Robert Morris has always been at the forefront of providing opportunities for a diverse student population with different interests and skills. League of Legends is a competitive, challenging game that requires a significant amount of teamwork to be successful. I'm really proud of our players and our coaching staff for what we accomplished this year. Second in North America for a first year program is amazing. In sports you win or lose and we came up short today. We need to credit UBC for a great performance and program. We have learned so much from this year and our players and coaches want to improve our program and return to the NACC finals next year.”

There are over 100 US and Canadian college and university teams in the Collegiate Starleague. Robert Morris competed with 1600 teams for Riot Game’s North American Collegiate Championship and scholarship money. Each RMU player on the five-person team received $15,000 in scholarship money.