CCAT and CT DECD partnered to promote the state’s hydrogen and fuel cell industry at Hannover Messe in April. 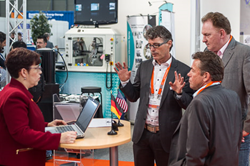 The Hannover Messe trade show provides a great opportunity to meet with customers in Europe that we don't typically get to visit on a regular basis. - Ken Burt, VP Sales & Marketing, Dexmet Corporation.

“This was a very exciting trade event for us. With its strong leadership position in green technology, especially in the hydrogen and fuel cell industry, Connecticut, by far, had the best representation of any other state at the Group Exhibit,” said Beatriz Gutierrez, executive director, DECD Office of Business Development.

“This trade show is one of the biggest in the world. It provides a great opportunity to showcase Connecticut’s strengths and capabilities and to attract more investment from international companies looking to expand their reach,” she added.

Commented Anthony Anderson, director, marketing and business development, Precision Combustion, Inc., “The support we received from the state of Connecticut and CCAT to help us attend this show has been tremendous. We learned of many good business opportunities at Hannover Messe and we expect this effort to lead to increased sales and exports.”

More than 220,000 trade visitors – 70,000 of whom came from outside Germany – attended Hannover Messe this year. With its designation as the 2016 official show Partner Country, the United States will have even greater visibility to attract foreign investment and expand trade next year.

About CCAT
Connecticut Center for Advanced Technology, Inc. (CCAT), a nonprofit economic development organization headquartered in East Hartford, Conn., is a leader and go-to resource for strengthening competitiveness and high-tech business development in the state, region and nation. CCAT focuses on three core areas: technology, efficiencies and workforce development, with expertise in manufacturing technology, IT, education and workforce strategies, and energy solutions. Through the synergy of its experienced teams, advanced technologies and extensive partnerships, CCAT provides manufacturers, educators, government, nonprofits and entrepreneurs with innovative solutions to tackle economic challenges, compete and succeed.

About DECD
Connecticut Department of Economic and Community Development is the state's lead agency for the development and implementation of policies, strategies and programs that support business growth and innovation. DECD’s Office of Business Development (OBD) works closely with companies to address their short and long-term business needs, and strengthen their overall competitiveness in the global marketplace. OBID’s team of business advisors are the single point of contact for companies interested in taking advantage of the many resources available to them. The OBD staff is creative, flexible, and responsive when it comes to turning economic development plans and proposals into successful—and profitable—realities.