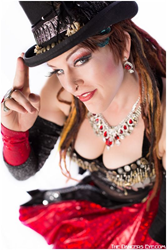 The Snake Oil Festival, June 19-21, will offer shows and classes in tarot, burlesque and sideshow performance arts, including a tarot workshop with Madame Onca.

“Snake Oil is seen as something fraudulent, but its origins are in real Chinese and native medicines, and we wanted to reclaim it as a symbol of a powerful antidote," said Little Luna. "Many people are seeking out new ways to be creatively inspired...

Other headliners include sideshow authority James Taylor, founder of "Shocked and Amazed!," the world's only periodical on contemporary and historical sideshow, co-founder of Baltimore's American Dime Museum and Washington DC's Palace of Wonders, and a regular contributor to the Huffington Post, as well as Asheville's tribal bellydance veteran, co-author of The World Spirit Tarot and founder/producer of Asheville's Americana Burlesque & Sideshow Festival, Madame Onca and “carny preacher” Armitage Shanks, an internationally recognized burlesque emcee and co-founder of the Seattle-based neo-cirque collective Circus Contraption.

The Snake Oil Festival is the only festival in the country to feature such a wide range of celebrated luminaries in the burlesque, sideshow, circus and variety arts communities. Each day will be dedicated to celebrating some aspect of the traveling shows of old, including medicine shows, sideshow, burlesque and an “unholy roller” revival. There will also be classes and workshops on burlesque, stage development and sideshow arts open to the public. VIP, Reserved and Standing Room Only tickets for all three nights are available now via Brown Paper Tickets (http://www.snakeoilfestival.com/#!tickets/cb9l) or by calling Brown Paper Tickets’ 24/7 event concierges at 1-800-838-3006.

“Snake Oil is seen as something fraudulent, but its origins are in real Chinese and native medicines, and we wanted to reclaim it as a symbol of a powerful antidote," said Snake Oil Festival co-producer Little Luna. "Many people are seeking out new ways to connect and be creatively inspired, seeing and being involved in live entertainment is a great way to do this. We hope to bring people together from all walks of performing life to engage and expand their artistic horizons.”

The three day event will entertain hundreds over the weekend, with the three evening shows (Carnival at the Crossroads, Hoochie Coochie Babylon and the Unholy Roller Revival) complemented by workshops, classes and vendors during the day. Classes will include a tarot workshop with Madame Onca, a burlesque development class from Bella Blue, a stage development class from Armitage Shanks, a sideshow workshop from Washington DC's Mab Just Mab and a lecture from James Taylor entitled “How I Spent My Carny Vacation” covering two decades of sideshow reporting.

The festival is the brainchild of a group of New Orleans-based performers and producers including burlesque emcee/comedian Ben Wisdom, who recently appeared in the third season of the FX series American Horror Story. Wisdom is also the producer of New Orleans' Slow Burn Burlesque and the emcee for Bella Blue's Dirty Dime Peepshow. Wisdom's co-producers include burlesque performer/producer Little Luna, co-founder of Gilded Lily Burlesque in Baltimore, and co-producer of the Unholy Roller Revival in New Orleans, and circus impresario/performer, Ginger Licious, founder and producer of Cirque du Licious in New Orleans.

More information on each night's show and performers can be found at the website, (http://www.snakeoilfestival.com).
###

EDITOR’S NOTE: High-resolution photos are available. If you would like to interview burlesque dancer and instructor Bella Blue or festival producers Ben Wisdom, Little Luna or Ginger Licious in-studio or by phone, contact Ben Wisdom at (504) 723-1585 or via e-mail at thebenwisdom(at)gmail(dot)com.

More About the Producers:

Ben Wisdom got his start in performance at the age of 17 as a radio disc jockey in Alexandria, Louisiana. He later moved to New Orleans and into the film business, working in art departments for major motion pictures. Since 2009, he has been a standup comedian, and co-producer of Slow Burn Burlesque, The Unholy Roller Revival, and The Snake Oil Festival. Additionally, he is the regular emcee for Bella Blue's Dirty Dime Peepshow, The Blue Book Cabaret, and Roxie le Rouge's Big Deal Burlesque. Ben has travelled the country as the Preacher of Perversion. He has emceed at such national events as the Americana Burlesque and Sideshow Festival, The Southern Fried Burlesque Festival, Burly Picks New Orleans, and the Voodoo Music Experience. In 2010, Ben's troupe, Slow Burn was the subject of the award winning documentary, Save Our Souls. In 2013, Ben brought his Preacher of Perversion act to TV as The Preacher in American Horror Story: Coven (20th Century Fox).

Little Luna has been performing in and co-producing shows on the burlesque and sideshow circuit since 2006. She was a founding member of Baltimore's premier burlesque troupe, Gilded Lily Burlesque and the co-producer of Gilded Lily from 2008-2012. She has appeared at ABS Fest in Asheville, N.C., as well as the New York Burlesque Fest and the Southern Fried Burlesque Fest in Atlanta. In April of 2012, she moved to New Orleans and has performed in The Tennessee Williams Festival, New Orleans Late Night: Literary Nocturnes, Slow Burn Burlesque, Fleur De Tease, Roxie Le Rouge's Big Deal Burlesque, The Dirty Dime Peep Show, and Bella Blue's Blue Book Cabaret. She is also the co-creator/co-producer of The Unholy Roller Revival. Additionally, she is a professional tarot reader both privately and on the midway. She has read for the Voodoo Music Experience, The Americana Burlesque and Sideshow Fest, Slow Burn Burlesque, Snake and Jake's Christmas Lounge and many other events.

About Brown Paper Tickets: Brown Paper Tickets (http://www.brownpapertickets.com) is the socially conscious global leader in online ticketing and event registration, helping people in 68 countries plan, promote and sell out events. As a social innovator, the company donates 5 percent of profits to charity with every ticket sold, supports a team of full-time community advocates, called “Doers,” and still charges the lowest fee for ticketing and services in the ticketing industry. In 2014, Brown Paper Tickets was rated #1 for ticketing and event registration by http://www.FindTheBest.com. To learn more about the world’s only Not-Just-For-Profit ticketing company, visit http://community.brownpapertickets.com/press/.