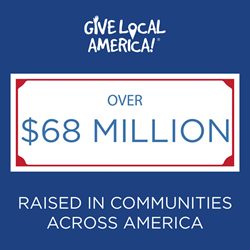 “With an event of this magnitude, promotion must scale to match. Our community partners and nonprofits did a fantastic job promoting their events."

The results are in: “Give Local America 2015,” which ran non-stop around the country on May 5, is officially the largest, single-day, charitable crowdfunding event to date. Through the course of the day, hundreds of thousands of donors were activated in 180 communities nationwide, raising more than $68 million for over 9,000 worthy nonprofits.

Some of the highlights of GLA 2015 included:

The top fundraising communities in America on May 5 included the Seattle Foundation (WA), which led with $16.25 million in gifts. Seattle was followed by Coastal (SC) , which raised $6.8 million for nonprofits in its community. St. Joseph County (IN), Sacramento (CA) and San Antonio (TX) were among the other frontrunners. The complete results can be viewed at http://www.givelocalamerica.org.

Give Local America 2015 (GLA) was organized and managed for the second year in a row by Kimbia. The combination of local, corporate support and Kimbia’s robust online giving platform gave nonprofits a unique way to not just acquire, but convert and retain new online donors—a group that is increasingly important to nonprofits as donor demographics change.

Kimbia Chief Executive Officer, Dan Gillett, attributes the success of the second annual crowdfunding event to several reasons. “With an event of this magnitude, promotion must scale to match. Our community partners and nonprofits did a fantastic job promoting their events. As we saw last year, and with participating communities this year, that includes activating corporate and foundation sponsors for incentive funds as well as media partners for greater reach, as that really makes a difference to the total amount raised.

“Our platform allows donors to not just donate quickly, but also to see real-time results—there’s a high degree of excitement that builds through the day. There is probably nothing as satisfying as knowing you’ve helped a worthy organization in your own community because by doing so, you’re playing a part in making your community better. That’s hugely satisfying for donors.”

Communities, nonprofits and donors across the nation are already excited about what will happen during the next online giving day. They’ve marked their calendars for Give Local America 2016, to be held on May 3, 2016.

Kimbia’s flexible, best-of-breed, online fundraising and crowdfunding platform enables you to create a deeper donor relationship by leveraging the strengths of each channel and while putting your donors at the center of all development activities. Ultimately this approach results in greater brand awareness, giving and lifelong loyalty.

About Give Local America:

Give Local America is a one-day national crowdfunding event that empowers every person to give back to their local communities by supporting the organizations they trust to tackle today’s most critical issues. The campaign is driven by the idea that every individual and every company has the ability to contribute to the betterment of their community, and that every contribution, no matter the size, makes a difference.

Give Local America is an initiative of Kimbia, the industry leader in providing trusted online fundraising technology and services to make it easier and faster for charities to find, convert and retain donors and supporters.