"Breaking Point is Investigation Discovery’s latest real-life crime drama. This Thursday night’s show portrays a Detroit family pushed to the brink by the criminal activity of a loved one" says Patrick Barone, the episode's featured lawyer. 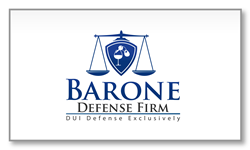 The Detroit area has had its share of criminal activity, and Breaking Point shows the collateral damage left in wake of the perpetrator's activities. Breaking Point also shows how a criminal intervention can be used to break the family's cycle of despair.

Featuring local criminal defense attorney Patrick Barone as the legal consultant, Thursday night’s episode has Chris as its protagonist. He is described by Investigation Discovery’s web site as a “44-year-old heroin dealer from Detroit with a rap sheet dating back 25 years.”

The general premise of the show is that whether we know it or not, our lives impact those of others; sometimes in a terribly negative manner. Furthermore, that the well-established modality of the intervention can be used successfully to bring any sort of addict to treatment, regardless of whether the addiction is to drugs and alcohol or criminal behavior.

"The Detroit area has had its share of criminal activity, and Breaking Point shows the collateral damage left in wake of the perpetrator's activities. Breaking Point also shows how a criminal intervention can be used to break the family's cycle of despair," said the show's local legal consultant Patrick Barone.

For the Detroit show, Darren Kavinoky facilitated the criminal intervention with Chris and his family, many of whom are depicted during the intervention. Filming took place over a two day period, and Birmingham, Michigan criminal defense attorney Patrick T. Barone was on hand as the show’s legal consultant. Barone appears briefly during the episode which premiers this Thursday May 14, 2015 at 10:00 p.m.

“Working with my good friend Darren was great fun. He is a talented interventionist and also one of the Nation’s top lawyers,” said Barone.

Does Chris choose treatment or does he reject his family’s pleas and return to his life on the street? Tune in Thursday night to find-out!

Patrick Barone is the Founding Partner and CEO of the Barone Defense Firm. With offices in Birmingham and Grand Rapids Michigan, the Firm’s 6 lawyers, represent citizens accused of crimes involving intoxicated driving, including those cases involving injury or death. As one of Michigan’s largest criminal defense laws firms, the Barone Defense Firm remains on the cutting edge of professional excellence. Since 2009 the Firm been included in US News & World Report’s America’s Best Law Firms. Mr. Barone has an “AV” rating from Martindale-Hubbell, is rated “Seriously Outstanding” by Super Lawyers and “Outstanding/10.0” by AVVO. His blog is: http://www.YourMichiganDUILawyer.com.