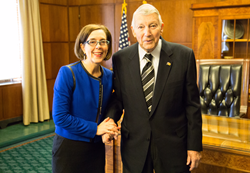 Governor Branstad is doing a great job of helping to keep the Spirit of '45 alive in America.

While presidential hopefuls from both parties are actively wooing voters in his state, Iowa Governor Terry Branstad is calling on his fellow governors to join him in a nonpartisan campaign to honor America's "greatest generation" this year by supporting events and activities commemorating the 70th anniversary of the end of WWII that will be taking place throughout the country in August. http://www.Spiritof45.org

Branstad met last week with representatives of Keep the Spirit of '45, a grassroots coalition that is organizing an WWII 70th Anniversary Spirit of '45 Commemorative Weekend in August that will begin with a mass "Kiss in" in Times Square on Friday, August 14, followed by flyovers by WWII aircraft, swing dances and concerts, rallies of Rosie the Riveter lookalikes, and open houses at senior residential communities throughout the country.

The weekend will conclude with an around the world Tribute in the form of "the longest continuous wreath laying ceremony in history" that will begin in the American national cemetery in the Philippines, continue westward across Europe and the continental United States, and end in Hawaii at the National Cemetery of the Pacific in Hawaii on Sunday, August 16.

Marine WWII veteran Dr. E. Bruce Heilman, 88, who is on a 6,000 mile motorcycle ride through 22 states to promote the 70th Anniversary, expressed his personal appreciation for the Governor Branstad's efforts to get all of his counterparts in every state to issue a proclamation in time for the national governors conference in July.

"Governor Branstad is doing a great job of helping to keep the Spirit of '45 alive in America," said Heilman, who stopped in Des Moines on his way to Washington, DC where he will be appearing as the Grand Marshal in the nation's largest Memorial Day parade in Washington, DC on May 25. "I'm dedicating my ride to the Gold Stars of WWII which include famous Iowan's Glenn Miller and the Sullivan Brothers."

Heilman was joined by Past State Commander of the Military Order of the Purple Heart, Paul Pickart who presented Governor Branstad with a proclamation signed earlier in the week by Oregon Governor Kate Brown designating the week of August 9 - 16 as "WWII 70th Anniversary Spirit of '45 Commemorative Week" that will feature a statewide concert tour and wreath laying ceremonies in several locations as part of the global Tribute.

Oregon was the first state in the country to pass legislation officially creating a state "Spirit of '45 Day" in 2013, honoring the legacy of service of the men and women of the WWII generation. The Oregon bill was modeled on the Concurrent Resolution calling for an annual national Spirit of '45 Day in August that Congress unanimously passed in 2010.

"We are very proud that Oregon is the first state to answer Governor Branstad's call for elected officials to honor the spirit of the men and women of our Greatest Generation so that their example of national unity, shared sacrifice and commitment to service will continue to inspire our country," said Barbara Jensen, of Salem, OR, who has been actively involved with the Spirit of '45 Day initiative in Oregon and is working with the American Battle Monuments Commission to organize wreath laying ceremonies in the U.K. and Europe as part of the global Tribute in August.

Iowa Governor Branstad with Dr. Heilman and Keep the Spirit of '45 Alive representatives